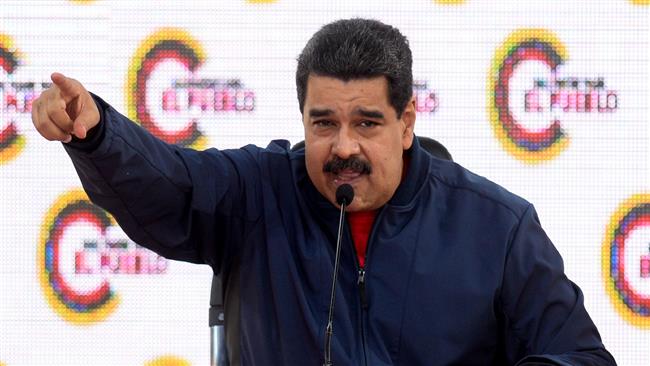 TEHRAN, Young Journalists Club (YJC) - "I tell the Vice President of the United States to take your noses out of Venezuela,” Maduro said in Caracas on Thursday, adding that "there will be no foreign, Yankee or imperialist intervention” in the country.
Venezuela has been the scene of anti-government protests for more than two months. Clashes between security forces and anti-government protesters have left over 70 people dead and 1,300 wounded. Two protesters, both aged 20, died on
Thursday during demonstrations in separate regions of the country.
The unrest broke out after the Supreme Court stripped the opposition-controlled parliament of its powers. The decision was later revoked, but protesters continued to take to the streets across the country against the government of Maduro.
Commenting on the political crisis in Venezuela at a Thursday gathering of American leaders, Pence said "that once-rich nation’s collapse into authoritarianism has pushed it into poverty and caused untold suffering for the Venezuelan people.”
Reacting to the comments, Maduro said Pence "is a man who doesn’t know where Venezuela is on the map but has an opinion on our homeland, on issues affecting Venezuela.”
"For better or worse we look after ourselves,” he stressed.
Maduro described Washington’s meddling in Venezuela’s internal affairs as nauseating and assured the nation that they were on the right path.
"What is coming in Venezuela is peace, democracy and elections,” he said.
The Caracas government says the protests are incited by the Unites Stated to remove President Maduro from power and has accused the opposition of hiring armed gangs.
On Wednesday, it was revealed that the US is considering slapping sanctions against a new list of Venezuelan officials it considers responsible for aggravating the troubled nation’s current crisis.
Secretary of State Rex Tillerson told the House Foreign Affairs Committee Wednesday his office is working with the US Treasury Department on compiling "a very robust list of individuals” it planned to sanction.
Share to
Related News
Maduro vows to fend off ‘coup’ after attacks
Venezuelan Supreme Court attacked by helicopter: President Maduro
Venezuelan foreign minister resigns to seek seat in planned Constituent Assembly
Venezuelan foreign minister resigns to seek seat in planned Constituent Assembly
All 7 missing US sailors found dead inside USS Fitzgerald
US, allies sponsor Daesh: Adviser to Syria's Assad
Clashes erupt between Venezuela police, protesters in Caracas
Protesters stage violent rally in Venezuela
Fresh protests rock Venezuela after man set on fire
200,000 protesters march against Venezuela’s Maduro
Death toll from Venezuela unrest hits 42 as violence continues
Huge opposition rally due in Venezuela
3 more people killed in Venezuela unrest
Tags
Venezuela ، Maduro ، pence
Your Comment