TEHRAN, July 12, YJC - US Republicans in the House of Representatives have unveiled a bill to allocate funding for the construction of a wall along the country’s southern border with Mexico in the next fiscal year, reigniting rows with Democrats blocking any spending bill for President Donald Trump’s signature campaign promise. 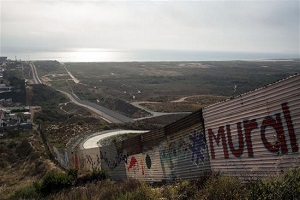 sum of 1.6 billion dollars for the next fiscal year to fund "physical barrier construction" on the US-Mexico border.

The allocation includes new border fencing along the border, 500 new Border Patrol agents and 1,000 more officers for US Immigration and Customs Enforcement operations in the country.

“Keeping Americans safe by protecting our homeland is a top priority,” he said.

Other Republicans also expressed readiness to back the bill, which provides necessary resources for the Trump administration to begin building the promised border wall despite opposition on the part of Democrats.

"I am willing to do whatever it takes in the Senate to ensure President Trump’s promise to the American people is kept,” said Representative Mo Brooks, a Freedom Caucus member. “I’ll aggressively oppose every single spending bill that doesn’t fund the border wall and expose every Republican establishment Senator who sides with the Democrats against our president.”
Last month, Senate Minority Leader Charles Schumer, a Democrat of New York, sent a letter expressing concern “with the president’s Fiscal Year 2018 request for a very expensive, ineffective new wall along the southern border with Mexico,” and rejected the idea of funding it.

Democrats have already vowed to block any wall funding even if it means sending the government into a partial shutdown. Trump and the Republican-controlled Congress, however, argue that the shutdown could be productive.

During the 2016 presidential campaign, Trump said Mexico would pay for the wall to keep illegal immigrants from entering the United States. The Mexican government has strongly rejected the claim.

As the first step to deliver on one of his most divisive campaign pledges, the new US president signed a directive to begin the construction of a wall on the border with Mexico just less than a week after assuming office in Washington.

The wall could end up costing as much as $21.6 billion, far more than the administration’s estimate of $12 billion, according to reports.