TEHRAN, July 18, YJC - South Sudan's President Salva Kiir declared a three-month state of emergency in his home state, where clashes have raged for months between clan-based militias, the government spokesman said on Tuesday. 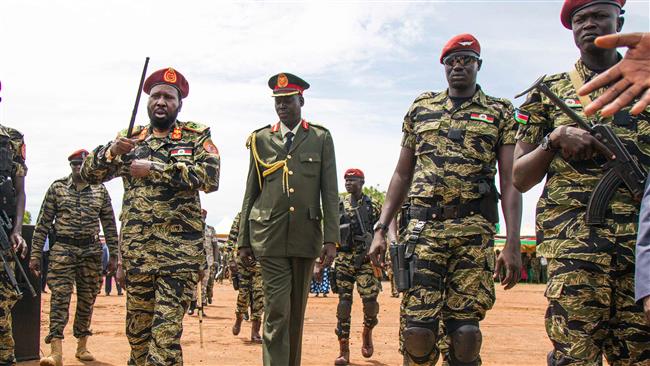 TEHRAN, Young Journalists Club (YJC) - Michael Makuei, who is also the information minister, said the army would be given powers to stop the fighting in Gogrial state, and that citizens' rights would be suspended, though the presidency has not announced which rights will be curtailed.

Local media said dozens of people had been killed in the fighting in the state in the country's north, though Reuters could not independently verify the number of those killed.

Makuei said the state of emergency also applied to the neighboring areas of Tonj, Wau, and Aweil East.

Wau has experienced fighting this year between government forces and rebels under former vice president Riek Machar, an ethnic Nuer, who is waging an insurgency in much of the country.

South Sudan descended into civil war in December 2013, largely between soldiers and militia from the Dinka and Nuer ethnic groups. The war has killed tens of thousands of people and displaced nearly 4 million people from their homes.

The clashes in Gogrial have been between militiamen from the Apuk and Aguok clans of the Dinka group, which Kiir belongs to. "The president declared a state of emergency in order to bring this situation under control," Makuei told Reuters by telephone.

"These are tribal fights which are connected to issues of land, grazing areas," Makuei said, Reuters reported.

Separately, 36 people were killed over the weekend in an attack on a village near Bor town in the Dinka-dominated central Jonglei state, the United Nations said Tuesday.

The United Nations said its peacekeepers were treating some of the 24 people injured in the attack.

Makuei, who is from Bor, blamed militia from the Murle tribe from neighboring Boma state for committing the attack and stealing thousands of cattle. Bor Dinka and Murle militia clashed earlier this year before signing a cessation of hostilities in May.

The minister said the Boma governor was summoned to a security council meeting and directed to apprehend those responsible for the attack.

Deadly cattle raids are common in South Sudan, an impoverished country awash in automatic weapons where livestock are used as money.