TEHRAN, July 20, YJC -The EU foreign policy chief say the “strong” nuclear deal struck in 2015 between Iran and the P5+1 states is the outcome of “collective cooperation,” emphasizing that the landmark accord does not just belong to the signatories but the entire global community. 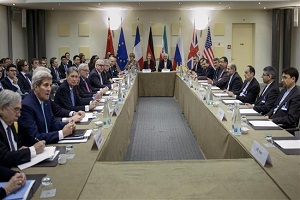 TEHRAN, Young Journalists Club (YJC) -“Two years after the deal with Iran was signed, we see and we breathe a very different atmosphere in global affairs. It is not always easy to find or to build the same spirit of collective responsibility that made the Iran deal possible,” Federica Mogheri said Wednesday.

“The deal with Iran does not simply belong to the parties that worked on it and made it possible. For sure, it does not belong to one or two countries alone. It belongs to the entire international community. The deal has made the region and the whole world more secure,” she added.

The top EU diplomat further emphasized the need for exercising “patience,” “perseverance” and “stubbornness” in efforts towards the achievement of “win-win solutions” to different international issues.

Mogherini described the current circumstances in the global affairs as “times of confusion” and said the existing hurdles could not be tackled by “acting alone.”

She, instead, underlined the EU’s commitment to a “collective cooperative” approach to resolving the international issues, noting that such a mindset has been a main factor in the achievement of Iran’s nuclear deal, called the Joint Comprehensive Plan of Action (JCPOA).

The top diplomat described the JCPOA as a “strong deal made to stand the test of time,” adding, “In these two years, the International Atomic Energy Agency (IAEA) has certified six times -- not once, six times – the full implementation of the deal’s provisions.”
Iran and the five permanent members of the United Nations Security Council plus Germany started implementing the JCPOA on January 16, 2016.
Under the agreement, limits were put on Iran’s nuclear activities in exchange for, among other things, the removal of all nuclear-related bans against the Islamic Republic.

However, US President Donald Trump has called the agreement “a very bad” deal. During his presidential campaign, he had even threatened to rip it up.

While working feverishly across the international community to tarnish Iran’s global image over the past two years, Washington has prevented the nuclear deal from fully yielding the intended results by refusing to offer international financial institutions the guarantees they need in order to restore transactions with the Islamic Republic.

The Trump administration has, since January, slapped three rounds of sanctions against Iran over its defensive missile program, which is not a breach of the 2015 deal.
Iran, the United Nations and the European Union have warned that the US could not unilaterally rescind the multilateral agreement. They regard the deal as a triumph for diplomacy and a major contributing factor to regional and international peace and stability.

In a Sunday interview with CNN, Iranian Foreign Minister Mohammad Javad Zarif warned that the US has been in violation of the JCPOA.

“For instance, when the White House made an announcement that President Trump used his presence in Hamburg during the G20 meeting in order to dissuade leaders from other countries from engaging in business with Iran, that is a violation of not [only] the spirit, [but also] of the letter of the JCPOA,” he noted.

“I believe the United States needs to bring itself into compliance with its part of the obligations under the deal.” Zarif said.