TEHRAN, July 21, YJC - At least 22 million Americans would lose health insurance coverage in the next decade under Senate Republicans’ Obamacare repeal-and-replace bill, according to a new Congressional analysis. 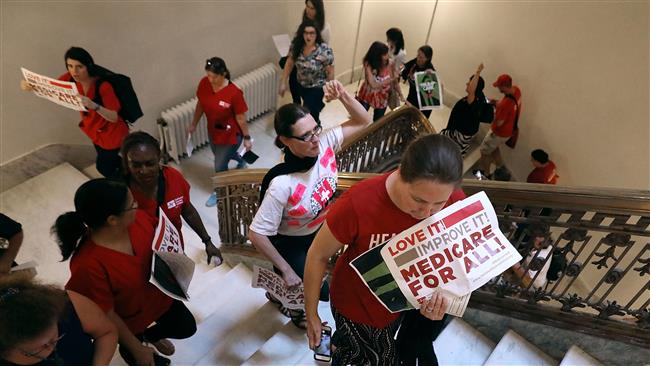 TEHRAN, Young Journalists Club (YJC) - The report by the Congressional Budget Office (CBO), issued on Friday, could create more problems for Republicans who on Monday failed to pass the Better Care Reconciliation Act (BCRA) despite having a 52-48 majority over Democrats in the 100-member Senate.

The latest GOP attempt to repeal and replace Obamacare was fatally wounded in the Senate when two more Republican senators voiced their opposition to the legislation.

The announcements from Mike Lee of Utah and Jerry Moran of Kansas effectively stalled the bill in the upper chamber. Senators Susan Collins and Rand Paul had already opposed the bill, arguing that could slash funding for Medicaid, the health insurance program for the poor and the disabled.

The CBO report estimated because the latest Republican legislation retains two of Obamacare taxes, it would result in a $420 billion deficit reduction by 2026.

The non-partisan CBO report forecasted that the GOP plan would leave 22 million more Americans uninsured over 10 years. The number of uninsured is unchanged from the original draft of the legislation published last month. It’s also far more than the uninsured rate under Obamacare.

In the most contentious Congressional vote of Trump's presidency last month, House lawmakers voted 217 to 213 to pass the Obamacare repeal-and-replace bill.

No Democrats backed the Republican bill and some 20 Republicans voted in opposition. Most of the Republican politicians have long vowed to repeal Obamacare, Presstv reported.

Health care experts from across the political spectrum have said that Trump’s health care bill is unworkable and suffers from fatal flaws and could lead to Americans dropping out of the health care market.

Experts agree that the bill fails to reach the objectives laid forth by Trump, which includes affordable coverage for everyone, lower deductibles and health care costs and better care.