TEHRAN, July 23, YJC - Two Palestinian teenagers have succumbed to their injuries sustained in a fresh wave of tensions over Israel’s imposition of restrictive measures at the al-Aqsa Mosque compound in the occupied East Jerusalem al-Quds. 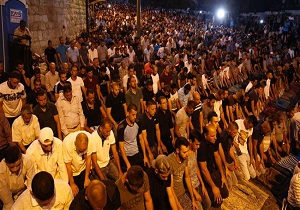 Another 18-year-old Palestinian sustained fatal injuries in the West Bank town of Abu Dis when a petrol bomb exploded prematurely, the ministry added.

Tensions erupted in the occupied territories on July 14, when a deadly shooting took place outside the Haram al-Sharif which Jews call Temple Mount.

Following the incident, Israeli police briefly shut down the al-Aqsa compound and canceled Muslim Friday prayers at the holy site.

Faced with mounting criticism, Israel reopened the compound on July 16, but with metal detectors and surveillance cameras put up at entrances.

Since then, however, Palestinians have been refusing to enter the al-Aqsa compound while holding mass prayers outside the site, some of which have turned violent.

According to the Red Crescent, 390 Palestinians have been wounded, including close to 100 hospitalized for Israeli live fire or rubber bullet injuries over the past few days.

Three Palestinians have been killed in street clashes with Israeli forces in Jerusalem al-Quds and three Israelis in an alleged stabbing attack at a West Bank settlement.

Palestinians say Israel’s fresh restrictions at al-Aqsa are meant to expand the regime’s control over the highly-sensitive site and change its status quo.

Palestinian President Mahmoud Abbas ordered the suspension of all official contact with Tel Aviv until it removed the metal detectors at the al-Aqsa Mosque compound gates.

Meanwhile, Jerusalem al-Quds' top Muslim cleric, Mohammed Hussein, has said that protests against Israel’s restrictions will continue until the devices are removed, stressing, “We will not back off."

The Middle East Quartet, comprising Russia, the US, the European Union and the United Nations has expressed concerns over the growing escalation in Jerusalem al-Quds. The UN Security Council is expected to meet on Monday to discuss the al-Aqsa tensions.

Muslims have held anti-Israeli protests in Jordan, Turkey and Malaysia.

Demonstrators gathered in the Jordanian capital, Amman, calling on the Arab and Muslim world to unify and "condemn the targeting of Jerusalem [al-Quds] and al-Aqsa Mosque"

Jordan's official Petra news agency reported that several political parties had issued a statement underlining the need for "unity of ranks" among Palestinians in order to "stand up to the Israeli plans."

Additionally, the Turkish cities of Ankara and Istanbul witnessed rallies in solidarity with al-Aqsa.

Turkey’s Prime Minister Binali Yildirim said that the Israeli measures at al-Aqsa "don't help to solve any problem, on the contrary, they will lead to an increase of tension in the region.”

Thousands of Malaysians also took to the streets of the capital Kuala Lumpur, carrying Palestinian flags and chanting slogans against Israel.

The protest ended at the US embassy, where representatives of the demonstrators delivered a letter in condemnation of the Israeli actions.