TEHRAN, July 26, YJC - Iranian freestyle wrestler Hassan Rahimi underwent a surgery on his right knee for a meniscus tear, which had been hurting him for a while and recently got serious to keep him away from national and international tournaments. 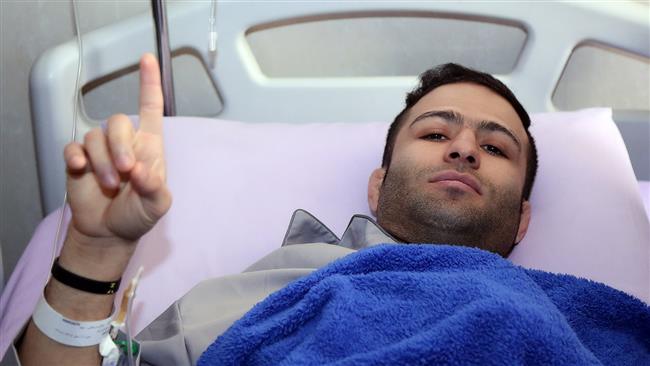 TEHRAN, Young Journalists Club (YJC) - The 27-year-old had the surgery at Treata Hospital in western Tehran on Tuesday after a magnetic resonance imaging (MRI) revealed a torn meniscus.

Doctor Reza Tavakkoli said the meniscectomy requires one month for healing, after which Rahimi needs to go through the rehabilitation time for meniscus repair.

Rahimi had to skip the 4th edition of Islamic Solidarity Games, which started in the Azerbaijani capital city of Baku on May 12 and wrapped up on May 22, 2017, due to the knee injury.

Earlier this month, Rahimi clinched the title as the world’s best athlete in the 57-kilogram weight class in the July 2017 edition of the United World Wrestling rankings.

While Rahimi had a 9-0 lead over his Cuban opponent, he pinned Rodriguez’s shoulders to the mat to win the bout by a fall in the third round and collect the bronze medal.

Rahimi, who had a bye in the first round, overpowered Armenian wrestler Garnik Mnatsakanyan 13-0 in the second, before overcoming Russia’s representative Victor Lebedev 6-1 in the quarterfinals.

The 27-year-old Iranian sportsman however conceded a 5-10 defeat from Japan’s Rei Higuchi in the semifinal, and had to appear in the bronze medal bout.

Wrestling bouts at the Rio 2016 Olympic Games began at Hall 3 of the Olympic Training Center in Barra da Tijucaon August 14, and ran through August 21, 2016.