TEHRAN, July 28, YJC - The US Senate voted overwhelmingly to impose new sanctions against Iran, Russia and North Korea, despite opposition from President Donald Trump to a section of the legislation. 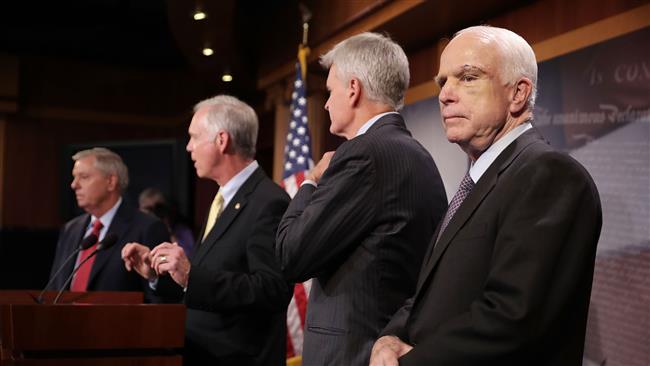 TEHRAN, Young Journalists Club (YJC) - The Senate backed the bill by a margin of 98-2 on Thursday, Reuters reported.
The measure has angered Russian President Vladimir Putin who threatened to retaliate against the US.

The legislation will now be sent to President Trump to sign into law or veto. He could veto the bill, but there is a chance that Congress could override his veto with a two-thirds vote.

The Republican-controlled House of Representatives already passed the bill on Tuesday in a 419-3 vote to impose new sanctions against Iran, Russia and North Korea.

But the decision by House Republicans to impose new sanctions against Pyongyang had gotten pushback from senators, who were working on their own sanctions bill.

On Wednesday, US lawmakers reportedly reached a deal on the sanctions legislation after a push to add in North Korea had threatened to complicate the bill's path forward.

"The Senate will move to approve the Iran and Russia sanctions it originally passed six weeks ago, as well as the North Korea sanctions developed by the House," Republican Senator Bob Corker, the chairman of the Foreign Relations Committee, said on Wednesday evening.

Corker said lawmakers had "an agreement that will allow us to send sanctions legislation to the president's desk," after holding discussions with Republican House Majority Leader Kevin McCarthy.

The Countering Iran's Destabilizing Activities Act – Russia sanctions were attached to it – was first passed in a 98-2 vote in mid-June, but was held up in the House after Republicans proposed that North Korea sanctions be included in the bill.

The new Senate legislation is the result of a congressional deal reached between Republicans and Democrats and is particularly aimed at punishing Moscow for its alleged meddling in the 2016 US presidential election and the reunion of Crimea with Russia.

The reunion happened after about 97 percent voters of the Autonomous Republic of Crimea backed "going home" in a referendum on March 16, 2014 following a 23-year stay in Ukraine.

Speaking hours before the Senate passed the legislation on Thursday, Republican Senate hawk John McCain said, "The United States of America needs to send a strong message to Vladimir Putin and any other aggressor that we will not tolerate attacks on our democracy."

'We'll have to retaliate': Putin

Responding to the sanctions news, Putin said on Thursday Russia would decide on how to retaliate once it had seen the final text of the bill.

Speaking in Savonlinna, Finland, the Russian leader said that Moscow was "exercising restraint and patience, but at some moment we'll have to retaliate. It's impossible to endlessly tolerate this boorishness towards our country."

Under the proposed bill, Trump is required to submit to Congress a report on his proposed actions that would "significantly alter" US foreign policy towards Russia.

The Trump administration has objected to this provision in the sanctions bill.

"He may sign the sanctions exactly the way they are or he may veto the sanctions and negotiate an even tougher deal against the Russians," Scaramucci said.

Before the Senate vote on Thursday, White House spokeswoman Sarah Sanders said the Trump administration support tougher sanctions against Russia, North Korea and Iran, adding "we're going to wait and see what that final legislation looks like and make a decision at that point."

Since his inauguration on January 20, President Trump has adopted a hostile policy towards Iran.

He has repeatedly vowed to cancel the nuclear agreement between Iran and the P5+1 group of countries, including the US, and his administration has imposed new sanctions on multiple Iranian individuals and entities.

Share to
Related News
US main loser after imposing sanctions on Iran, Russia: Leader’s aide
New sanctions show US insistence on hostility toward Iran: Senior MP
Iran parliament body to meet on US threats against nuclear deal: MP
New anti-Iran sanctions reminder of US untrustworthy nature: Top cleric
Deputy top commander: Iran's armed forces to give crushing response to US mischiefs
US must alter its policy of issuing sanctions against other nations: Zarif
Tags
US ، senate ، Iran ، Russianorth korea
Your Comment