TEHRAN, July 30, YJC - The US military says it has successfully tested a Terminal High Altitude Defense (THAAD) missile system in Alaska by intercepting a ballistic missile over the Pacific Ocean. 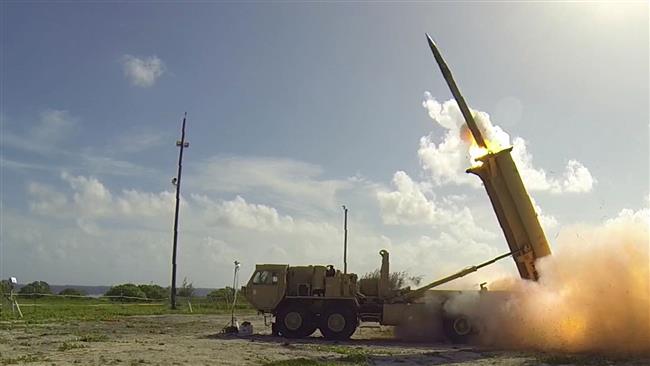 TEHRAN, Young Journalists Club (YJC) - A ballistic missile was fired by a US Air Force plane and intercepted over the Pacific by a THAAD system in Kodiak, Alaska, the Missile Defense Agency (MDA) said Sunday, describing the test as "successful."

The THAAD system "detected, tracked and intercepted the target," according to the MDA's statement.

The test will help the US “to stay ahead of the evolving threat,” said MDA Director Lieutenant General Sam Greaves in a statement, without elaborating.

The US military conducted the anti-missile test amid rising tensions with North Korea. The US claims North Korea poses a threat against its mainland as well as its two Asia-Pacific allies South Korea and Japan.

THAAD is a ground-based missile defense system designed to shoot down short-, medium- and intermediate-range ballistic missiles. It has also been deployed to Guam and South Korea.

The standoff between Pyongyang and Washington escalated earlier this week after Pyongyang test-launched a Hwasong-14 intercontinental ballistic missile (ICBM), firing it into the Sea of Japan.

Overseeing the test was North Korean leader Kim Jung-un, who said the long-range missile demonstrated the country's surprise attack capability and sent a "serious warning" to the US.

The Hwasong-14 flew 998 kilometers for some 47 minutes at a maximum altitude of 3,724.9 kilometers, according to North Korea's official Korean Central News Agency (KCNA).

US authorities had earlier confirmed that the missile was an ICBM but downplayed claims that it could reach the US mainland, Presstv reported.

THAAD’s deployment to North Korea has angered China and Russia, who think the system’s powerful radar could be used to gather data on their territories.

Moscow and Beijing issued a joint statement earlier this month, calling on Washington to halt THAAD’s deployment on the Korean Peninsula.