TEHRAN, July 31, YJC - Damascus has called on the UN to end the Washington’s crimes against Syrian civilians, while stressing that the US is systematically targeting residential areas. 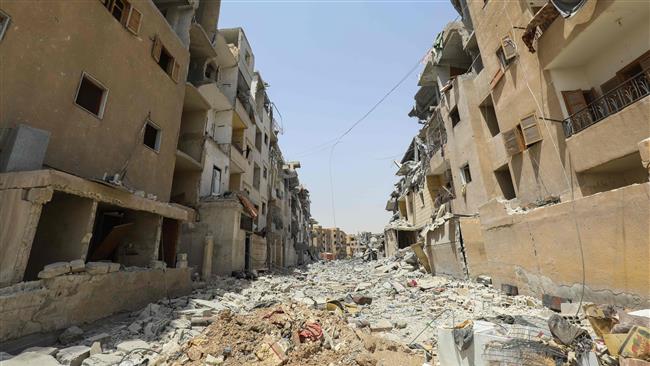 TEHRAN, Young Journalists Club (YJC) - On Sunday, the Syrian foreign ministry sent two letters to UN Secretary General Antonio Guterres and the chairman of the UN Security Council, calling for the dissolving of the US-led coalition in Syria which is operating in the country without permission from Damascus.

“The US-led international coalition continues to commit massacres against Syrian innocent civilians through conducting systematic airstrikes on the provinces of Raqqah, Hasakah, Aleppo and Dayr al-Zawr on a daily basis," reads the letter.

The letters were sent after at least six civilians lost their lives and nearly a dozen others sustained injuries when the US-led coalition, purportedly fighting the Daesh Takfiri terrorist group, conducted a series of airstrikes in Syria’s eastern province of Dayr al-Zawr.

The letters noted that the coalition’s member states continue to support terrorist groups such as Daesh and Jabhat al-Nusra.

“Those attacks contributed to the spread of creative chaos, the killing and destruction which fulfill goals of the coalition and the terrorist organizations in destabilizing security in the region, destroying Syria’s capabilities and prolonging the crisis in a way that serves the interests of the Israeli entity,” it adds.Syria has been has been fighting different foreign-sponsored militant and terrorist groups since March 2011. UN Special Envoy for Syria Staffan de Mistura estimated last August that more than 400,000 people had been killed in the crisis until then.