TEHRAN, July 31, YJC -The second storm to hit Taiwan in 24 hours battered southern and central parts of the island on Monday after Typhoon Nesat injured more than 100 people and shut businesses at the weekend. 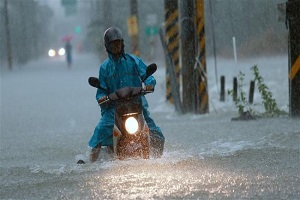 TEHRAN, Young Journalists Club (YJC) - Financial markets and businesses will be open in Taipei on Monday as the capital returns to normal.

However, the island’s second-largest city of Kaohsiung, on the southern coast, will remain shut with the second storm, Typhoon Haitang, expected to bring torrential rain and possible flooding and landslides.

Typhoon Haitang made landfall in the south and southeast on Sunday afternoon, the government said on its website. It is the first time the island has issued alerts for two storms simultaneously in 50 years, the Central Weather Bureau said.

Nesat, a medium strength typhoon with wind speeds of around 119 km per hour (70 mph), made landfall on Saturday but has moved on to China's Fujian province, the bureau and Chinese state news agency Xinhua said.

It forced the cancellation of over 40 round-trip flights by EVA Airways Corp, Taiwan’s second-largest carrier, affecting more than 10,000 passengers, the airline said.