TEHRAN, July 31, YJC US President Donald Trump’s secret donors have been leading outside efforts to either defend him against investigations or win him support among voters and congressional Republicans, according to a new report. 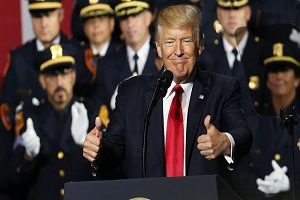 TEHRAN, Young Journalists Club (YJC) -Billionaire Charles Koch, an entrepreneur who has been running a political empire with his brother Robert, has so far spent 2 million to boost Trump’s tax-cut plan and is aiming to hold another event in Washington to rally congressional support, the USA Today reported Sunday.

Americans for Prosperity, the Koch network’s grass-roots arm, has scheduled some 50 events in August and September to promote the blueprint.

The Great America Alliance, another pro-Trump group, has spent more than $3 million advertising Trump’s policies and has committed to spend another $5 million for the same purpose, says Eric Beach, a Republican strategist who helps run the group.

The group is also behind a $450,000 ad that claims the ongoing probe into Trump’s alleged ties to Russia is a “rigged game.”

The group’s policy director Carrie Severino said in a statement that the JCN was “prepared to spend whatever we need to spend to help President Trump fulfill his promise of restoring balance to our federal courts.”

According to the report, non-profit groups have spent $7.5 million to influence congressional special elections so far this year, up from $1.8 million spent over the same period in the 2013-2014 election cycles.

All of the donating groups are non-profits that can accept any amount of money from virtually anyone without being required by law to disclose their donors.

During last year’s presidential campaign, Trump time and again accused his Democratic rival Hillary Clinton of taking large sums of money in form of donations to the Clinton Foundation in exchange for political favors.

The president says McCabe should have recused himself from the probe because his wife, Jill, had received nearly $700,000 from a close Clinton ally during her unsuccessful 2015 campaign for the Virginia state Senate.