TEHRAN, July 31, YJC - An Iranian scientist Beniamin Zahiri along with his colleagues at British Colombia applyed low voltage to a nanostructured copper surface changing its oxidation state, and hence its ability to attract and repel liquids. 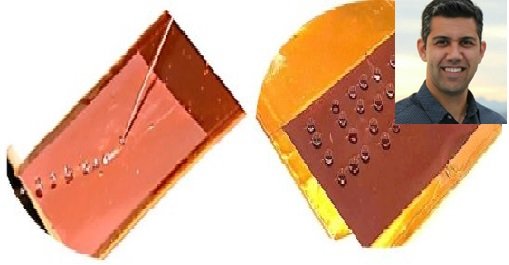 TEHRAN, Young Journalists Club (YJC) - For many years, engineers have sought to create a special kind of surface: one that can both repel and absorb liquids, and whose ability to do so—its "wetting behaviour"—can be quickly and precisely controlled. The technology would have a wide range of potential applications, from water filtration and biomedical devices to liquid optical lenses and lab-on-a-chip systems.

Such a "smart surface" has now been developed by researchers at the University of British Columbia. Inexpensive, scalable and powered by just a conventional electric battery, the copper-based surface changes from being very water-repellent (superhydrophobic) to very water-absorbent (superhydrophilic) as electric potential is applied.

"When tiny voltages are applied to the surface, water droplets that initially roll off stick to it more and more tightly," says Ben Zahiri, the study's co-lead author. "By changing the magnitude of the voltage and how long it is applied, we can easily control the angle that each droplet forms with the surface and how quickly this happens."

When the electric potential is removed, the droplet retains its shape and remains pinned in place.

Other groups have modified the wetting behaviour of copper surfaces using stimuli like heat, UV radiation and X-rays. But in order to achieve this, the required temperatures are high—up to 300 degrees Celsius—and the required exposure times are long—from tens of minutes to days. This makes them impractical for a number of consumer and industrial purposes.

In contrast, the electrical stimulus used by the UBC team modifies wetting behaviour rapidly (from a few seconds to a few minutes) and reversibly, at voltages found in everyday batteries (less than 1.5 V). It does so by changing the oxidation state of the copper surface, which contains a mixture of hydrophilic CuO and hydrophobic Cu2O: as copper loses electrons, it becomes less attracted to water.

The ability to control surface wettability could be useful wherever droplets, or solid particles absorbed by droplets, need to be manipulated, including microfluidic devices and hazardous material handling systems. It also offers advanced self-cleaning capabilities by enabling the controlled roll-off of fluids.

Although the UBC team chose to investigate copper because it is cheap, abundant and one of the most commonly used metals in the world, Zahiri believes that the electrochemical manipulation of other metals, metal oxides and mixed oxides may yield similarly promising results. As for the liquid, any conductive fluid, such as blood, could be used.
"These findings could open up a new area of exploration for smart surfaces," said UBC mechanical engineering professor Walter Mérida, who supervised the work.
This study was recently published in Advanced Materials Interfaces.