TEHRAN, August 9, YJC -Four Egyptian policemen have been killed in a shooting attack on a patrol car in the Sinai Peninsula. 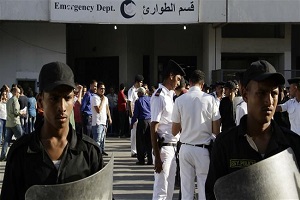 TEHRAN, Young Journalists Club (YJC) -State newspaper Al-Ahram reported that gunmen opened fire on the vehicle in the city of el-Arish, the capital of North Sinai Province, on Wednesday.

In July, Egypt was hit by one of the worst attacks on its security forces in years. Nearly two dozen soldiers were killed and 26 more wounded in two bombings claimed by the Takfiri Daesh terrorist group, which targeted security checkpoints south of the city of Rafah in northern Sinai on the seventh day of that month.

The Sinai Peninsula has been under a state of emergency since October 2014, after a deadly terrorist attack killed 33 Egyptian soldiers.

Over the past years, militants have been carrying out anti-government activities and fatal attacks, taking advantage of the turmoil caused in Egypt after the democratically-elected president, Mohamed Morsi, was ousted in a coup in July 2013.

The Velayat Sinai militant group, which is an affiliate of Daesh, has claimed responsibility for most of the assaults mainly targeting the army and police.

The Wednesday attack comes a day after two policemen were killed and one injured when a group of wanted criminals opened fire on security forces in a village north of the Egyptian capital, Cairo.