US-led coalition must be transparent on airstrikes in Syria: Rights groups

TEHRAN, August 12, YJC -Human rights groups have expressed concerns over the mounting civilian cost of airstrikes being carried out by the US-led coalition purportedly fighting Takfiri Daesh terrorists in Syria, stressing that the military contingent must be more transparent in how it makes targeting decisions. 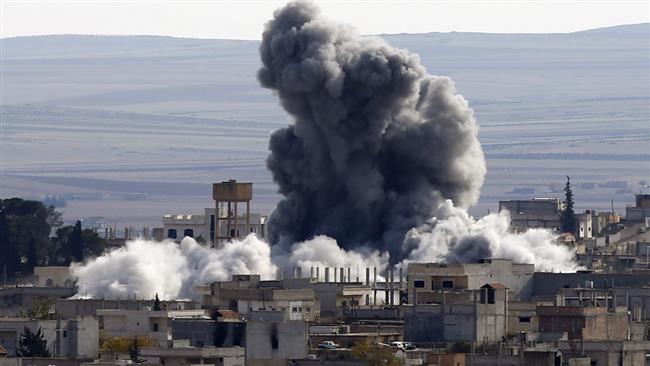 TEHRAN, Young Journalists Club (YJC) - “The coalition is not taking any precautions to avoid civilian casualties,” Aghid al-Khodr, a senior editor at Sound and Picture, an organization that maintains a network of covert correspondents in Raqqah – the de facto Daesh capital in Syria, said.

“The number of Daesh fighters in the city does not exceed 500, but if they’re going to destroy a residential building and wipe out all the people in it every time they want to kill a Daesh fighter then they will be purging the city from both Daesh and the residents,” he added.

Rights groups further argued that the US-led airstrikes have on some occasions endangered large groups of civilians in an effort to kill a single Daesh militant.

“There are definitely grounds for caution and concern and the need to beef up the process by which targets are selected,” Nadim Houry, the director of the terrorism and counter-terrorism program at Human Rights Watch, said.

“We know that Daesh fights from civilian areas; and in some cases intentionally uses civilians to protect itself,” he pointed out.

“The coalition still has the obligation to minimize civilian casualties and have a robust mechanism in place. When it fails the result can be very deadly for civilians, so an investigation of these strikes is essential,” Houry noted.

The city of Raqqah, which lies on the northern bank of the Euphrates River, was overrun by Daesh terrorists in March 2013, and was proclaimed the center for most of the Takfiris’ administrative and control tasks the following year.

It is estimated that a population of 300,000 civilians is trapped inside Raqqah, including 80,000 displaced from other parts of Syria. Thousands have fled in recent months, and the United Nations Office for the Coordination of Humanitarian Affairs believes about 160,000 people remain in the city.

On June 6, the US-backed militiamen from the so-called Syrian Democratic Forces (SDF) said they had launched an operation aimed at pushing Daesh out of Raqqah.