Protesters in Malaysia urge end to violence against Rohingya Muslims

TEHRAN, August 31 - Nearly 1,200 protesters have taken to the streets in the Malaysian capital, Kuala Lumpur, in solidarity with Rohingya Muslims after a fresh wave of violence erupted against the persecuted community in Myanmar. 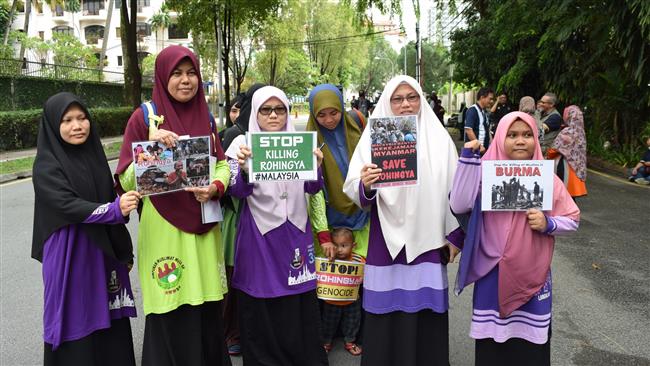 TEHRAN, Young Journalists Club (YJC) - Most of the people who protested in Kuala Lumpur on Wednesday were Rohingya Muslims themselves who feared that their families had been killed and their homes burned down in Myanmar.

The demonstrators were calling for an end to the violence against the minority, holding placards that read, "Stop killing Rohingya."

A 20-year-old Rohingya protester, who gave his name as Niamutullah, said, "Dead, they are all dead, they were shot."

"I have not been able to contact them for two days," he added, as he shook his head and covered his face with his hand.

Police dispersed the demonstration, arresting nearly 155 people. One of the detainees attempted to set himself ablaze, according to police.

Anamul Hassan, another demonstrator who was arrested by police said minutes before detention, "My younger brother and sisters were crying for me when I spoke to them two days ago: Where do we go? We don't have any place to go?"

Rohingya Muslims, a community of more than a million people, have been denied citizenship and access to basic rights as the Buddhist-majority country of Myanmar views them as intruders from neighboring Bangladesh. The Rohingya reject claims about their origins and say their ancestors have lived in the area for decades.

Buddhist extremists have been waging communal violence in Myanmar's Rakhine state since 2012. Hundreds of people have been killed and tens of thousands forced from their homes as a result.

In addition, Rakhine has been under a military lockdown, which came with a “counterinsurgency” push since an alleged attack on the country’s border guards on October 9 last year. Nine police officers were killed in that attack, which the government blamed on armed Rohingya.

At least 110 people have been killed in a fresh bout of violence that has gripped the region since six days ago. The government has put the blame on “militants” in an attempt to justify its heavy-handed security response.

The International Organization for Migration said on Wednesday that the government crackdown in Myanmar had forced 18,500 members of the Rohingya community to flee to Bangladesh in less than a week, Presstv reported.

The United Nations believes that Myanmar’s government might have committed ethnic cleansing and crimes against humanity in its crackdown on the Rohingya.