TEHRAN, September 2 - The winners of 2017 Noor (scientific) Student Competition were honored in the closing ceremony 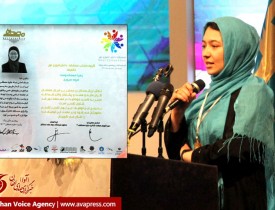 TEHRAN, Young Journalists Club (YJC) - Closing ceremony and awards presentation of Noor Student Competition, commemorating Prof. Jackie Ying, one of the prominent scholars of the Muslim world in science and technology, were held as the winners from over 5000 nominations from different countries were honored for their remarkable achievements.

On September 1st, concurrent with the Eid al-Adha, the closing ceremony of the second round of Noor Student Competition took place at the “Hozeh Honari - Andisheh Hall” in Tehran.

The winning students and top educational centers were honored and praised for their achievements.

The Noor Student Competition 2017 has been named after Jackie Ying who was also one of the laureates of The Mustafa(pbuh) Prize 2015 - the science and technology award - for her achievement in the field of Bio and Nanoscience.

This event was held attended by Sorena Sattari, Chairman of Policymaking Council of the Mustafa(pbuh); Mahdi Saffarinia, Secretary of the Council and guests include winners and their families and academic figures.

The 2017 winners were selected based on their efforts, initiative, and creativity and attractiveness of submitted works. 50 selected works will enter a TV-broadcast contest and they will be broadcast in turn within a TV program.

“Noor Student Competition provides opportunities for students to develop in theoretical and sophisticated sciences such as mathematics, physics and chemistry. Being recognized, scientific breakthroughs, expanding the boundaries of knowledge and to be known as a future scientist in the Islamic world are intended objectives and accomplished effect of Noor Student Competition” Said Mahdi Saffarinia in his speech in this ceremony.

Pointing out that Noor Student Competition allows students to be familiar with different sciences, Saffarinia added: “during this event they find chance to learn team working which itself is basically very valuable.”

5109 students in form of 2194 groups took part in second round by sending a sum of 1194, one -minute films of their scientific experiments. The participants were allowed to compete in all fields of science including physics, chemistry, biology, mathematics and astronomy.

The annual Noor Student Competition, launched in 2016 by the Mustafa(pbuh) Science and Technology Foundation (MSTF), to recognize and cultivate young students talents as well as promote scientific cooperation between educational centers. The first round of this competition due to the 1000th anniversary of authoring ‘The Book of Optics’ by “Ibn al-Haytham” was held in commemoration of this eminent Muslim scholar.

It is worth mentioning that press conference of this event was held on Monday, 28th August with the participation of MSTF officials and the reporters of several domestic and international media.