TEHRAN, September 3 - An Iranian expert of western Asian issues says Netanyahu is of the world’s well-known warmongers who is addicted to lying. 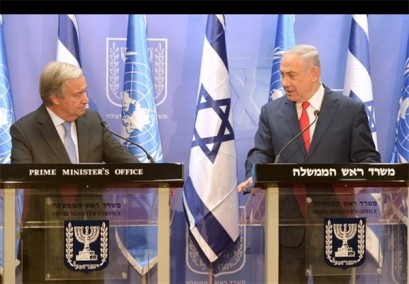 TEHRAN, Young Journalists Club (YJC) - Referring to Netanyahu’s claims about Iranians making factories of precision-guided missiles in Lebanon and Syria, Hassan Darvishvand said “Netanyahu is of the world’s infamous warmongers such that once an atmosphere of war dominates the world the he takes a sigh of relief”.

Darvishvand said that these sort of individuals could not rule in a sustained peace and security. “Netanyahu’s known strategy is to create Iranophobia in the world, and he has addicted to lying. So, the Zionist Prime Minister’s sayings could not be considered as important”.

In a visit to the UN Secretary General Antonio Guteress, Benjamin Netanyahu had claimed that Iran is building factories of precision-guided missile in Syria and Lebanon and that the country is trying to turn Syria to a military base for its forces for anti-Israel purposes.