In Houston, wayward alligators look to return home, too

TEHRAN, September 4 - As floodwaters in Houston recede, residents returning to their homes are finding reptilian neighbors have set up camp in unexpected places 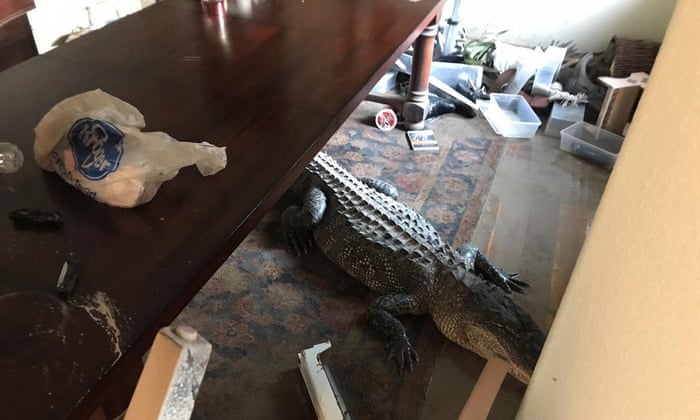 TEHRAN, Young Journalists Club (YJC) - Humans were not the only animals displaced by Hurricane Harvey’s epic flooding in south Texas and Louisiana. Now, as the waters recede, returning residents are finding neighbors from the animal kingdom in unexpected places.

On Friday, Brian Foster returned to his Lake Houston, Texas, home on Friday to find a 9ft-alligator in the living room. A Harris County Precinct 4 Constable tweeted a photo of the reptile, which was shortly afterwards collected by wildlife control officers.

'Gators are refugees from the hurricane themselves. They’re disheveled and upset

According to Chris Stephens, aka Gator Chris, a “nuisance control hunter” with the nonprofit, Houston-based Gator Squad, reptiles have been suffering just as people have. Alligators, which cannot withstand the fast moving flood waters for long periods, were forced to find higher ground where people were also seeking refuge.

“Their ponds and creeks are overwhelmed with water, so they’re finding themselves in unfamiliar neighborhoods surrounded by people and they don’t have much of a choice,” Stephens told the Guardian. 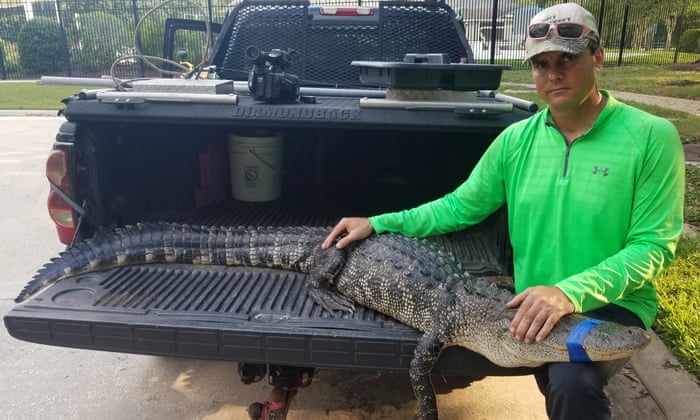 “So it’s been common for folks coming home to find ‘gators. They’re not overly aggressive. They’re just dislodged, and refugees from the hurricane themselves. They’re disheveled and upset.”

“The rules of co-existence break down during a flood, so right now our job is to keep the balance between them and the people, keep everybody getting along, but we can’t leave them all alone, like the one that was found in the house.”

Texas Parks and Wildlife officials warned last week that alligators would likely be found in “areas where they aren’t normally observed” following the storm. Officials advised people to keep their distance.

“Never approach, harass or feed an alligator. When water levels recede, the alligator will likely disappear as well.”

During the extensive flooding in Beaumont, Texas, the owner of Gator Country, a 15-acre gator sanctuary, warned that water levels were only a foot below the top of a fence that held 350 alligators in the preserve.

“Just to put things in perspective, a couple hundred alligators escaping in this part of Texas is a drop in the bucket compared to the wild population,” Texas Parks and Wildlife Department spokesperson Steve Lightfoot said. As the floods receded, no alligators were reported missing.

An estimated half a million alligators live in Texas. Attacks on humans are rare. But on 4 July this year, 28-year-old Tommie Woodward apparently ignored warning signs and died after being taken by an 11-footer during a late-night swim at a private marina.

“He said blank the alligators and thereupon jumped into the water,” Orange County Justice of the Peace Rodney Price told KFDM 6.

But wildlife educators like Chris Stephens express concern that alligators can be made out to be “the bad guys”.

“’Gators don’t want to bother people, but must be respected as Apex predators,” he said. “They are powerful and defensive of their territory or young, but they’re not aggressive bullies looking to pick fights.”

In the aftermath of the flooding, the next test for alligators will be to re-establish their home territories as they will likely have lost their nests to the flood. August and September are typically when alligators hatch their young, explained Stephens.

“This year’s generation of alligators in Texas just got wiped away. Literally, next to no alligator eggs will have survived that flood. Harvey will have a significant effect but we won’t notice any overall dip in the numbers for five or six years.”

At least alligators can swim, Stephens said. “A lot of furry animals that can’t swim and couldn’t get out of the way got hit just as hard.”