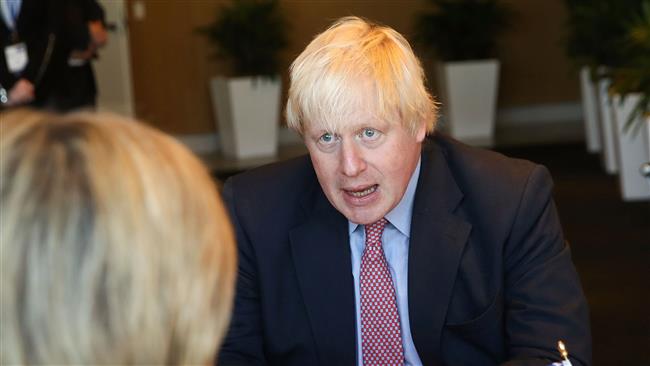 He urged Suu Kyi to “use her remarkable qualities" to end violence against Muslims in Rakhine state, where the United Nations believes the government might have committed ethnic cleansing and crimes against humanity in its crackdown on Muslims.

Suu Kyi won the Nobel Peace Prize for her political activism Myanmar’s military rulers, but her failure to condemn and stop ethnic cleansing of Rohingya Muslims by Myanmar’s security forces have damaged her reputation.

Suu Kyi is constitutionally barred from holding the office of president but her party’s Htin Kyaw was sworn in as president in 2016 after the National League for Democracy won a landslide victory in the 2015 elections. She is now effectively rules Myanmar in the specially created position of state counselor.

"Aung San Suu Kyi is rightly regarded as one of the most inspiring figures of our age, but the treatment of the Rohingya is alas besmirching the reputation of Burma,” Johnson said.

"She faces huge challenges in modernizing her country. I hope she can now use all her remarkable qualities to unite her country, to stop the violence and to end the prejudice that afflicts both Muslims and other communities in Rakhine,” he added.

"It is vital that she receives the support of the Burmese military, and that her attempts at peacemaking are not frustrated. She and all in Burma will have our full support in this,” he stated.

According to the UN High Commissioner for Refugees, nearly 90,000 Rohingyas have fled to neighboring Bangladesh since violence erupted in Rakhine state on August 25. Hundreds of people are thought to have died in the violence.

More than a dozen Nobel laureates wrote an open letter to the UN Security Council in December last year warning of a tragedy “amounting to ethnic cleansing and crimes against humanity” in Rakhine state, citing the “potential for genocide.”

The refugees say their villages are being raided and burned by the country’s security forces and by extremists who call themselves Buddhist nationals. They tell stories of the indiscriminate killing of civilians.

The extremists frequently attack Rohingyas and have set fire to their homes in several villages in Rakhine. Myanmar army forces allegedly provided the fanatics containers of petrol for torching the houses of Muslim villagers, who were then forced to flee.

Myanmar’s government refuses to recognize Rohingya Muslims as citizens and labels them as “illegal” immigrants.

Rohingya Muslims have been denied Myanmar citizenship since a new citizenship law was enacted in 1982, and there have been a number of attacks on Rohingyas over in recent years.

The violence that originally targeted Rohingya Muslims in western Myanmar is beginning to spread to other parts of the country, where Muslims who have been granted citizenship are now being attacked, according to the website Myanmarmuslims.org.

About one million Rohingyas in the western state of Rakhine are deprived of citizenship rights due to the policy of discrimination that has denied them the right of citizenship and made them vulnerable to acts of violence and persecution, expulsion, and displacement.

The Myanmar government has so far refused to extricate the stateless Rohingyas from their citizenship limbo, despite international pressure to give them a legal status.

Rohingya Muslims have faced torture, neglect, and repression in Myanmar for many years, Presstv reported.

Rohingyas are said to be Muslim descendants of Persian, Turkish, Bengali, and Pathan origin, who migrated to Myanmar as early as the 8th century. Amnesty International and Human Rights Watch have issued separate statements, calling on Myanmar to take action to protect the Rohingya Muslim population against extremists.