Trump holds the fate of 800,000 young immigrants in his hands

TEHRAN, September 5 - US President Donald Trump plans to announce Tuesday his decision on whether to end an amnesty for hundreds of thousands of people brought to America illegally as minors and who for the most part are thoroughly integrated into US society. 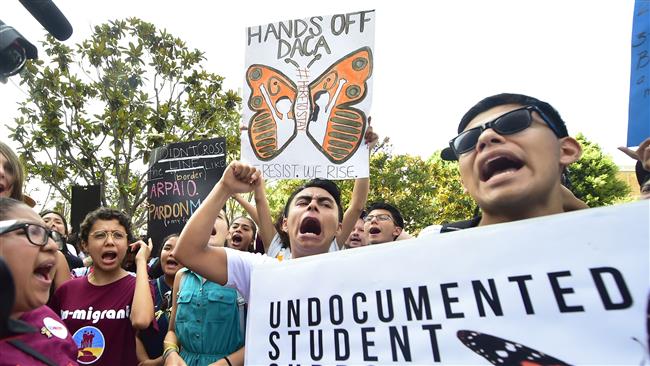 TEHRAN, Young Journalists Club (YJC) - His predecessor Barack Obama implemented the so-called DACA program -- Deferred Action for Childhood Arrivals -- five years ago to help bring these young immigrants out of the shadows of illegality, permitting them to study and work without fear.

The debate over DACA has been intense on both sides. For days White House officials have insisted that numerous options are under study, warning against any hasty conclusions before the official announcement.

But one reporting line has repeatedly surfaced: that the US president, determined to keep a central pledge to his political base to fight illegal immigration, plans to end the symbolically important program after a six-month delay intended to give Congress time to find a solution for the approximately 800,000 "Dreamers," most of them from Latin America.

Several Republican lawmakers have warned against the temptation to cancel the popular program outright, a decision that could lead to the expulsion of many Dreamers.

Republican Senator James Lankford of Oklahoma summed up the concern of many, saying that "we as Americans do not hold children legally accountable for the actions of their parents."

But the prospects of a badly divided Congress reaching a compromise in months on a subject that has eluded agreement for years -- immigration -- seem dim.

Trump, despite his inflammatory campaign-trail diatribes against immigration, has publicly agonized and equivocated over the fate of the young immigrants since arriving in the White House.

Calling his decision one of the most difficult facing him, he has promised to deal with DACA with "great heart."

"We love the Dreamers," he said Friday during a brief exchange with reporters in the Oval Office.

He added, "We love everybody."

Trump advisers indicated over the weekend that the president's decision would be guided as well by economic considerations.

The president "wants to do what's fair to the American worker, what's fair to people in this country who are competing for jobs," Trump adviser Kellyanne Conway told Fox News.

Much of the business world, and particularly the high-tech firms of California's Silicon Valley, stands firmly against a DACA repeal. The program offers the equivalent of a residence permit -- renewable every two years -- to young people who were under 16 when they arrived and who have no criminal record.

Facebook founder Mark Zuckerberg changed his profile on the social network on Saturday, adding a simple message to his photo: "#Here to Stay -- I support DACA."
CEO Tim Cook similarly offered strong backing for the 250 of his colleagues at Apple who are Dreamers. "I stand with them," he said. "They deserve our respect as equals and a solution rooted in American values."

During his final White House news conference, on January 18, Obama said he wanted to stay out of the spotlight, but he also listed the conditions that might cause him to break his silence if the country's "fundamental values" were under threat.

"I would put in that category efforts to round up kids who have grown up here and for all practical purposes are American kids and send them someplace else," Obama said, noting that many were attending community colleges or even serving in the military.

"The notion that we would just arbitrarily, or because of politics, punish those kids when they didn't do anything wrong themselves, I think, would be something that would merit me speaking out."