TEHRAN, September 6 -Russian President Vladimir Putin has called for engagement with North Korea, reiterating that the US-led sanctions against Pyongyang will not resolve the intensifying tensions with the Asian country. 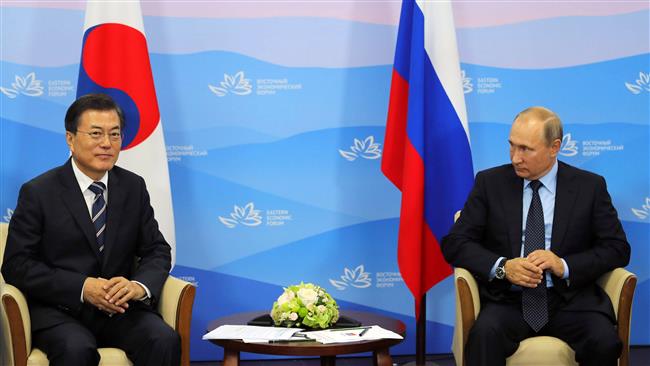 TEHRAN, Young Journalists Club (YJC) - “Without political and diplomatic tools, it is impossible to make headway in the current situation; to be more precise, it is impossible at all,” Putin said at a joint press conference with his South Korean counterpart, Moon Jae-in, in Russia on Wednesday.

“Today, as never before, everyone needs to show composure and avoid steps that lead to an escalation of tensions,” the Russian president said. “It is not worth giving in to emotions and driving North Korea into a corner.”
Speaking in China on Tuesday, Putin had slammed Pyongyang’s recent nuclear test as provocative while warning of a global catastrophe unless a diplomatic solution was reached over the issue. He also underlined that Moscow regarded more sanctions on North Korea as “useless and ineffective.”

The South Korean president also said on Wednesday that he and Putin both believed that resolving the North Korean issue was a top priority for development in East Asia.

“It is more important than anything else to resolve the North’s nuclear and missile issues, which are the most urgent and gravest challenges facing this region, at an earliest date,” Moon said.

“President Putin and I also agreed that the missile development pursued by North Korea is a wrong path and it is an urgent task to ease tension on the Korean Peninsula,” he added.
Moon asserted that Putin had expressed his full support for South Korea’s efforts to handle issues related to North Korea.

North Korea has stepped up its missile and nuclear programs, drawing widespread anger.
Putin and Moon were meeting on the sidelines of the third Eastern Economic Forum (EEF) in the far-east Russian city of Vladivostok. They also talked about trade and bilateral relations.

Twenty four countries have confirmed their participation in the EEF, being held on September 6-7. The 2016 forum brought together 3,500 participants, and included the signing of 111 investment projects.

Japanese Prime Minister Shinzo Abe is also due to meet Putin on Thursday. He told reporters before his departure from Japan that, “We must make North Korea understand there is no bright future for the country if it pursues the current path.”

Meanwhile, Russian Foreign Minister Sergey Lavrov has said that delegations from Russia and North Korea may meet on the sidelines of the EEF event this week.

Speaking on Wednesday, he also said that the delegation from Pyongyang would be made up of economic officials, state news agency Tass reported.

Lavrov also said that Moscow planned to insist that a potential US-proposed resolution on North Korea at the United Nations should not include military action.

He further said Russia and China agreed that all sides had to return to dialog over the situation concerning North Korea.