TEHRAN, September 6 - A so-called monitoring group says at least a dozen civilians have lost their lives when the US-led coalition purportedly fighting the Daesh Takfiri terrorist group conducted a series of aerial assaults on Syria’s militant-held northern city of Raqqah. 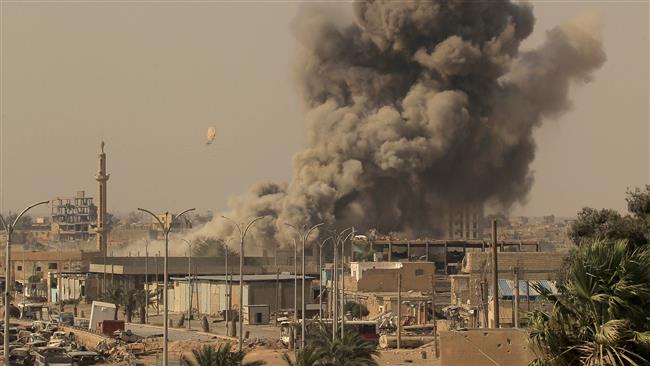 TEHRAN, Young Journalists Club (YJC) - The Syrian Observatory for Human Rights reported on Wednesday that 12 civilians, including two children and four women, had lost their lives in the attacks against residential areas in the city, located about 455 kilometers (283 miles) northeast of the capital Damascus.

The report came only two days after Syria’s official news agency SANA reported that at least 14 civilians had been killed in similar airstrikes against al-Naim district in the city.

The city of Raqqah, which lies on the northern bank of the Euphrates River, was overrun by Daesh terrorists in March 2013, and was proclaimed the center for most of the administrative and control tasks of the Takfiri terrorist group the following year.

The Office of the United Nations High Commissioner for Human Rights (OHCHR) says Daesh terrorists are holding some of the civilians trapped in Raqqah as human shields.

The military alliance has repeatedly been accused of targeting and killing civilians. It has also been largely incapable of fulfilling its declared objective of destroying Daesh.

On June 6, US-backed militiamen from the so-called Syrian Democratic Forces (SDF) said they had launched an operation aimed at pushing Daesh out of Raqqah.

The UN human rights chief said in a statement on August 31 that civilians trapped in Raqqah were paying an “unacceptable price,” suggesting that the US-led coalition may be violating international law in the territory.

“Given the extremely high number of reports of civilian casualties this month and the intensity of the airstrikes on Raqqah, coupled with Daesh’s use of civilians as human shields, I am deeply concerned that civilians, who should be protected at all times, are paying an unacceptable price and forces involved in battling Daesh are losing sight of the ultimate goal of this battle,” said United Nations High Commissioner for Human Rights Zeid Ra'ad al-Hussein.

Share to
Related News
Syria writes to UN again to urge end to US 'war crimes'
US airlifts Daesh terrorists to use them elsewhere: Syrian foreign minister
Over 2,800 Syrian civilians killed in US-led airstrikes in 3 years: SOHR
US-backed SDF controlling 90% of Syria’s Raqqah: Monitor
US strikes kill at least 22 civilians in Syria’s Raqqah, Dayr al-Zawr
US forces had better leave Syria on their own: Syrian deputy FM
US airstrikes shoot down drone, kill 17 civilians in Syria
US-led airstrikes kills over dozen civilians in northern Syria
Tags
SYria ، US ، airstrike
Your Comment