TEHRAN, September 7 - Peace activists have launched an international campaign calling on Nobel Peace Prize Committee to take back its 1991 prize to Myanmar’s de facto ruler Aung San Suu Kyi over her complicity in what is viewed as the ethnic cleansing of Rohingya Muslims in the country. 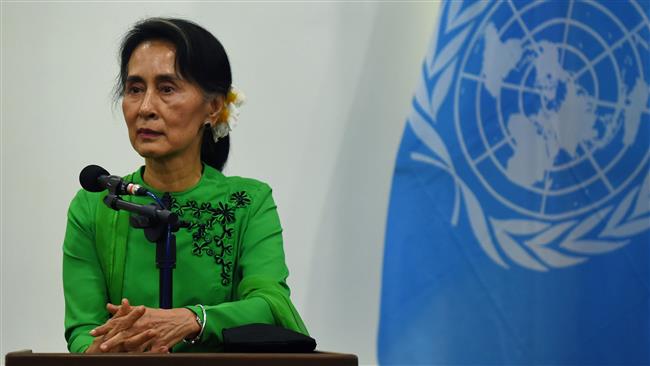 TEHRAN, Young Journalists Club (YJC) - The petition launched at change.org has already been signed by 366,000 supporters.

“When a laureate cannot maintain peace, then for the sake of peace itself the prize needs to be returned or confiscated by the Nobel Peace Prize Committee,” the petition reads.

The campaign pointed to the catastrophic humanitarian situation of Rohingya Muslims, saying, “Until this second, the de facto ruler of Myanmar Aung San Suu Kyi has done virtually nothing to stop this crime against humanity in her country.”

“Suu Kyi as a Nobel Peace Prize laureate appears to be deaf and have done nothing to protect her citizens,” it read.

Myanmar’s forces have been attacking Rohingya Muslims and torching their villages in Rakhine State since October 2016. The attacks have seen a sharp rise since August 25, following a number of armed attacks on police and military posts in the troubled western state.

The Rohingya have also been subject to communal violence by extremist Buddhists for years, forcing large groups of Muslims to flee their homeland to take refuge in Bangladesh and other neighboring countries.

The latest eruption of violence in Rakhine has killed more than 400 people and triggered an exodus of the Rohingya to Bangladesh.

Suu Kyi’s government has snubbed and obstructed UN officials who have sought to investigate the situation and it has prevented aid agencies from delivering food, water and medicines to the refugees.

Considering Suu Kyi’s reputation for micromanagement, political analysts say it seems unlikely that the ongoing violence is taking place without her approval.

Human Rights Watch earlier said satellite imagery showed 700 buildings were burned in the Rohingya village of Chein Khar Li, just one of the 17 locations in Rakhine where the rights group has documented burning of homes and property. It blamed Myanmarese forces for the fires.

On Wednesday, Dipayan Bhattacharyya, who is Bangladesh spokesman for the World Food Program (WFP), said the UN officials have raised their estimate of the total expected Rohingya refugees fleeing to Bangladesh from 120,000 to 300,000.

There have been numerous eyewitness accounts of summary executions, rapes, and arson attacks by the military since the crackdown against the minority group began.

Myanmar’s forces have reportedly been putting landmines in their territory along the barbed-wire fence between a series of border pillars over the past three days in an attempt to prevent the return of the Rohingya who have already fled to Bangladesh.