TEHRAN, September 8 -Donald Trump Jr. has told Senate investigators that he did not recall details of White House involvement in the public response to his infamous meeting with a Russian lawyer. 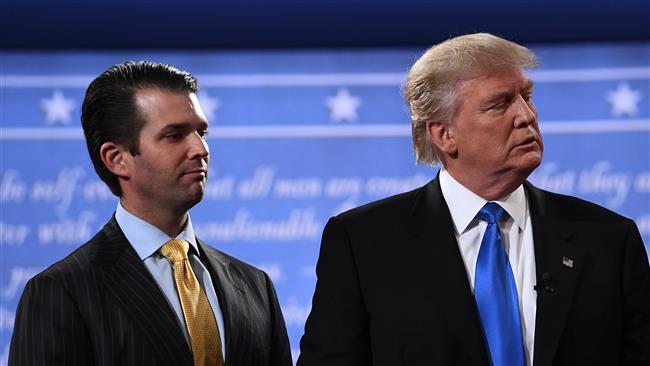 The president’s son had attended the meeting after he was promised compromising information on his father’s Democratic contender, Hillary Clinton. However, he told the investigators that the meeting provided no useful information and was a waste of time.

"The meeting was instead primarily focused on Russian adoptions," he said.

Asked why Trump promised the next day that dirt was coming on Clinton, Trump Jr. said that was the way his father talks.

Trump Jr. said he was not aware of what role, if any, his father might have played in an early statement that explained the reason behind the meeting, which was widely criticized as misleading.
Trump's son-in-law and senior White House adviser Jared Kushner and then-campaign chairman Paul Manafort were also present at the meeting, which has emerged as a sign of possible collusion between the Trump campaign and Russia.

Democratic Sen. Richard Blumenthal, who sat in on the meeting with committee staff, told CNN that Trump Jr. did not ease their concerns. “There certainly are a lot of areas that have been opened for future witnesses and questioning.”

The president’s son, however, tweeted that, “I answered every question posed by the Committee. . . until both sides had exhausted their lines of questioning. I trust this interview fully satisfied their inquiry.”

Special Counsel Robert Mueller's investigators have reportedly approached the White House about interviewing staffers who were aboard Air Force One when the initial statement about the meeting was crafted, according to people familiar with the inquiry.

President Trump has been under pressure for the alleged Russian role in his victory; allegations that both Trump and the Russian government have denied.