TEHRAN, September 8 -Journalists who have toured villages in a crisis-stricken state in Myanmar have reported new fires burning in a village that has been abandoned by Rohingya Muslims, casting further doubt on government claims that the Muslims are burning down their own homes. 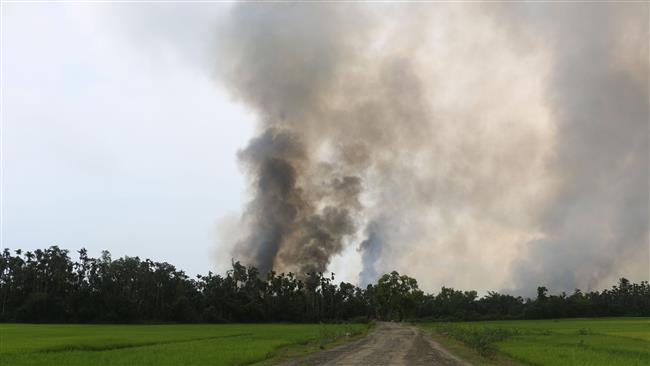 They also reported seeing pages ripped from Islamic texts that were scattered on the ground. Among the buildings on fire was a school. Cattle and dogs wandered through the remains.

Myanmar’s government has been claiming that the Muslims are responsible for the fires and the destruction. However, the reporters who visited five blackened, obliterated, and deserted villages on Thursday said there had been no Muslims in the village to light any fires.

“They burned their own houses and ran away,” claimed local police officer Aung Kyaw Moe, referring to the Rohingya Muslims.

Buddhist-majority Myanmar refers to Rohingya as immigrants from Bangladesh, even though many Rohingya families have lived in Myanmar for generations.

Thousands of people from the Muslim minority group have already escaped Rakhine to neighboring Bangladesh amid a government crackdown. The burning down of the homes of the Rohingya makes it less likely for them to return.

Earlier, Bangladeshi government sources said Myanmarese forces were laying down mines on a section of the border to prevent the return of the Muslims. But Muslims have been using that path to move in the opposite direction — into Bangladesh — and several explosions have already been heard. A number of civilians, including children, have been reported maimed.
Myanmar’s de facto leader, Aung San Suu Kyi, has dismissed the widespread reports of government and mob violence against the Rohingya as a misinformation campaign.

Her response to the crisis has sparked calls to have her Nobel Peace Prize taken back.

The crisis response director for Amnesty International has called Suu Kyi’s response to the crisis “unconscionable.”

There have been numerous reports of rape, murder, and arson against the Muslim population in Rakhine since a government siege began on the state late last year.

Prior to that, the Muslims were frequent targets of Buddhist mobs. Tens of thousands of Rohingya were driven from their homes in another wave of violence in 2012.