TEHRAN, September 8 - The race to flee Hurricane Irma became a marathon nightmare for many as more than a half-million people were ordered to leave South Florida on Thursday. 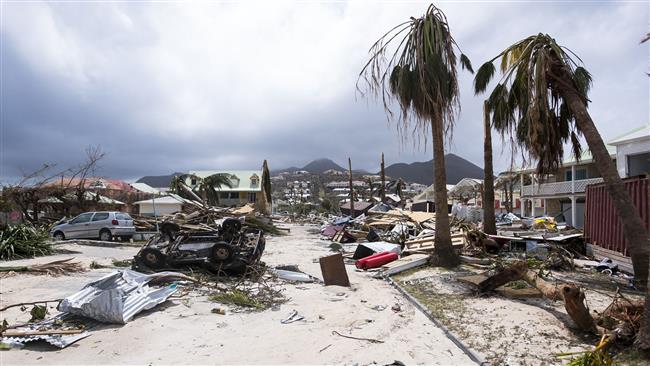 TEHRAN, Young Journalists Club (YJC) -With the storm barreling toward the tip of Florida for perhaps a catastrophic blow this weekend, normally quick trips turned into daylong journeys on crowded highways amid a constant search for gasoline and lodging.

Airline seats out of Florida were in short supply as well. Mari and Neal Michaud loaded their two children and dog into their small sport-utility vehicle and left their home near Cocoa Beach about 10 a.m., bound for an impromptu vacation in Washington, DC.

Using a phone app and calls to search for fuel along the way, they finally arrived at a convenience store that had gasoline nearly five hours later.

The 60-mile trip up Interstate 95 should have taken an hour, said Mari Michaud. "There was no gas and it's gridlock. People are stranded on the sides of the highway," she said. "It's 92 degrees out and little kids are out on the grass on the side of the road. No one can help them."

The National Hurricane Center issued a hurricane watch for the Keys and parts of South Florida, including some of the Miami metropolitan area of 6 million people.

It was the first of perhaps many watches and warnings along the Southeastern coast over the next several days as forecasters warn the storm could hit anywhere from Florida to North Carolina.

As people along the Atlantic coast anxiously watched the behemoth, Irma battered the northern Caribbean, killing at least seven people and leaving thousands homeless after destroying buildings and uprooting trees.

At least 31,000 people fled the Florida Keys, which could begin seeing wind and rain from Irma as early as Friday night, Gov. Rick Scott said. He noted the size of the powerful Category 5 storm, and told residents not to become complacent.
"It is wider than our entire state and could cause major and life-threatening impacts from coast to coast. Regardless of which coast you live on, be prepared to evacuate," Scott said.

NASA secured Kennedy Space Center and SpaceX launched an unmanned rocket for an experimental flight. Kennedy closed its doors to all nonessential staff and a crew of about 120 people will ride out the storm on site.

Most of the critical buildings at Kennedy are designed to withstand gusts of up to 135 mph (220 kph). Irma's wind could exceed that if it reaches Cape Canaveral. With winds that peaked at 185 mph (300 kph), Irma was the most powerful hurricane ever recorded in the Atlantic.

Georgia Gov. Nathan Deal ordered evacuations for all areas east of Interstate 95, including the city of Savannah, and authorized about 5,000 National Guard members to help with response and recovery.

Noel Marsden said he, his girlfriend, her son and their dog left Pembroke Pines north of Miami with plans to ride out Irma in Savannah, only to find the city was also shutting down because of Irma. Marsden isn't sure where they'll all end up.

"I've got a buddy in Atlanta and a buddy in Charlotte. We'll wind up one of those two places because there are not hotels, I can tell you that," he said.

The last time Georgia was struck by a hurricane of force Category 3 or higher happened in 1898. Irma's eventual path and Florida's fate depends on when and how sharp the powerful hurricane takes a right turn, National Weather Service Director Louis Uccellini said.

"It has become more likely that Irma will make landfall in southern Florida as a dangerous major hurricane," the Hurricane Center said in a forecast discussion Thursday afternoon.

The last Category 5 storm to hit Florida was Andrew in 1992. Its winds topped 165 mph (265 kph), killing 65 people and inflicting $26 billion in damage. It was at the time the most expensive natural disaster in US history.

President Donald Trump urged people to "be careful, be safe" during Hurricane Irma. In a tweet, Trump remarked that Irma "is raging but we have great teams of talented and brave people already in place and ready to help."

Trump's exclusive Mar-a-Lago resort in Palm Beach — the unofficial Southern White House — sits in the path of the storm. US Air Force Reserve weather officer Maj. Jeremy DeHart flew through the eye of Irma at 10,000 feet Wednesday and through Hurricane Harvey just before it hit Texas last month.

He said Irma's intensity set it apart from other storms. "Spectacular is the word that keeps coming to mind. Pictures don't do it justice. Satellite images can't do it justice," DeHart said.