US military strike would be 'a very sad day for North Korea': Trump

TEHRAN, September 8 - A US military strike against North Korea would be “a very sad day for North Korea,” President Donald Trump has said. 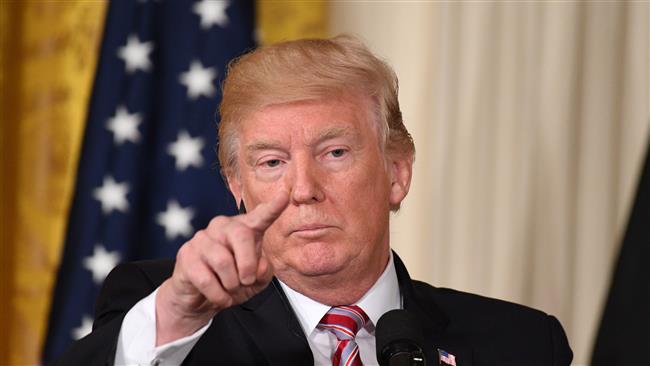 TEHRAN, Young Journalists Club (YJC) - Speaking at a news conference in the White House in Washington, DC, on Thursday, Trump said a military action against Pyongyang is still on the table while said that “nothing’s inevitable.”

“Military action would certainly be an option. Is it inevitable? Nothing's inevitable. It would be great if something else could be worked out,” he said.

Trump added that if the United States has to a military action against Pyongyang, "It will be a very sad day for North Korea."

“I would prefer not going the route of the military, but it's something certainly that could happen. Our military has never been stronger,” he added.

Trump stated since his inauguration he has increased military spending, saying that “each day, new equipment is delivered, new and beautiful equipment, the best in the world, the best anywhere in the world by far. Hopefully, we're not going to have to use it on North Korea.”

Trump told Japanese Prime Minister Shinzo Abe on Sunday that the US is ready to use the “full range” of capabilities, including nuclear arsenal, at its disposal in dealing with North Korea, after the country conducted a test of a hydrogen bomb that could be placed on an intercontinental ballistic missile.

In his earlier remarks, Trump warned that North Korea would face “fire and fury” should it continue to threaten the United States.

North Korea on Sunday announced it had conducted a “successful” hydrogen bomb test, hours after two tremors were detected in the country.

“The hydrogen bomb test was a perfect success,” North Korean state television said, adding that the device was capable of being loaded onto long-range missiles.

The North Korean broadcaster said the nuclear test had an “unprecedentedly large power,” and that it “marked a very significant occasion in attaining the final goal of completing the state nuclear force.”

"We are still assessing that test," a senior Trump administration official said while speaking on condition of anonymity. "So far there is nothing inconsistent with the North Korean claim that this was a hydrogen bomb, but we don't have a conclusive view on it yet."

North Korea’s leader Kim Jong-un has ordered the production of more rocket warheads and engines, shortly after the United States suggested that its threats of military action and sanctions were having an impact on Pyongyang’s behavior.