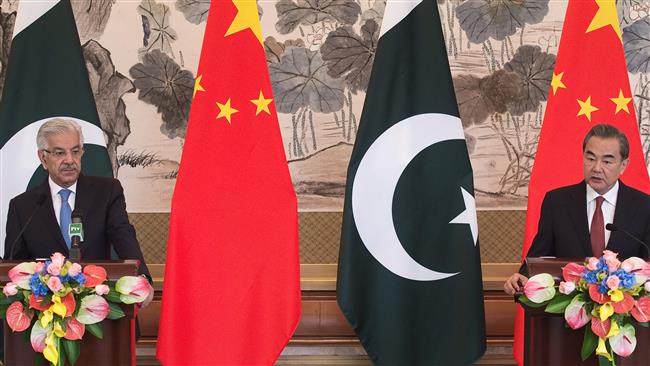 TEHRAN, Young Journalists Club (YJC) -“The government and people of Pakistan have made huge sacrifices in the fight against terrorism and such efforts and sacrifices are there for everyone to see,” said Chinese Foreign Minister Wang Yi in a joint press conference with his Pakistani counterpart Khawaja Muhammad Asif in Beijing on Friday.

“The international community should recognize that... and give Pakistan the full credit it deserves,” Wang said.

He said Beijing stood firm by its “ironclad friend” Pakistan even though “some countries” did not give the Asian country the credit it deserved in battling terror, in a thinly-veiled reference to the US.

Trump censured Pakistan for harboring “agents of chaos” during an address outlining Washington’s new policy on Afghanistan last month. He suggested that Washington would change the nature of its ties with Islamabad as a result.
After the remarks by Trump, US Secretary of State Rex Tillerson also warned that Pakistan may lose its status as a Washington ally in the region and face the suspension of US military aid.

Asif said during the Friday press briefing that Pakistan firmly believed that maintaining regional security is a “critical” priority and the top focus should remain peaceful solutions.

He expressed appreciation for Beijing’s role in hosting a trilateral Afghanistan-China-Pakistan forum, which is expected to be held at the ministerial level before the end of the current year.

Islamabad has repeatedly rejected claims of being soft on terrorism, accusing Washington of ignoring the thousands of lives that have been lost in Pakistan and the billions spent battling radical militants.

Analysts, however, have long expressed concerns about Pakistan’s backing for militant groups, including the Taliban.

Last year, Sartaj Aziz, an adviser to Pakistan’s then-prime minister, said that Taliban’s leadership enjoyed safe haven inside Pakistan, which he said Islamabad used as a “lever” to pressure the group into talks with Kabul.