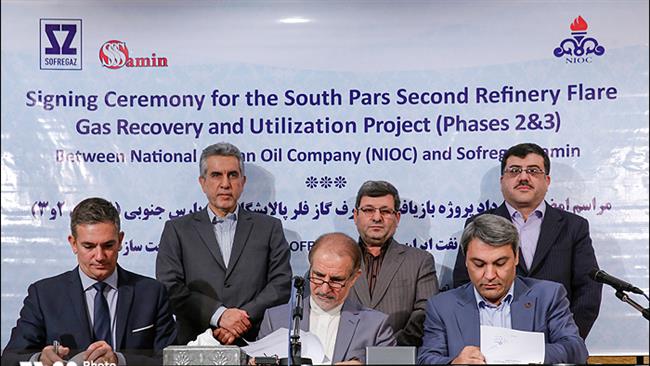 TEHRAN, Young Journalists Club (YJC) - A few days before, Iran awarded a deal worth €42 million to a consortium held by French Sofregaz for a similar project at the treatment plant of South Pars Phases 2 and 3.

Mohammad Meshkin-Fam, the managing director of Pars Oil and Gas Company (POGC) said, “Cutting volume of industrial pollutants is a considerable matter which has been stressed in Iran’s upstream documents and it is one of the main concerns of the officials”.

He then added that the agreement Sofregaz seeks the same purpose.

Meshkin-Fam also expressed hope that this agreement would be the beginning point for more deals at all 13 treatment plants in South Pars.

Based on the agreement which was signed on Wednesday, the French company would cooperate with Iran’s Samin Sazeh over the project.

Elsewhere in his remarks, Meshkin-Fam said only 10 countries are responsible for 75 percent of the overall industrial gas released into the atmosphere and said Iran was one of those countries.

“Iran is the leading country in the Middle East in terms of releasing pollutant gases into the atmosphere,” he said. “We hope that this situation would change”.

POGC chief further emphasized that the treatment plants in South Pars had been designed in a way to prevent the flaring of excess natural gas produced at fields.

However, he said the multiple-year sanctions against the country had undermine the performance of the plants to the same connection.

Sofregaz will be the second French company that has won a deal in Iran's energy sector.

In early July, Total signed an agreement with the National Iranian Oil Company (NIOC) to develop Iran's South Pars Phase 11. Total is expected to invest around $5 billion in the project which it will implement together with CNPC of China and Petropars of Iran.