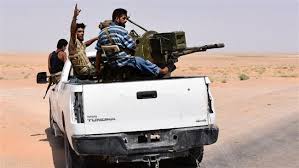 TEHRAN, Young Journalists Club (YJC) -Syria’s official news agency, SANA, citing an unnamed military source, reported that Shoula, which lies some 22 kilometers southwest of Dayr al-Zawr, was fully liberated from the grips of Daesh on Friday after an army operation, supported by the Syrian and Russian air forces, eliminated the last pockets of terrorists in the town.

It added that the Syrian troops also flushed out terrorists from a number of overlooking hills near Shoula.

Meanwhile, Syrian government forces, backed by fighter jets, are tightening the noose around Daesh terrorists, who are holed up in Dayr al-Zawr's military airport. Local sources say the troops are now less than two kilometers away from the airport and Maqabir district.

The developments came three days after Syrian army units, backed by government and Russian warplanes, managed to reach pro-government forces trapped in the eastern city in a major breakthrough. The move effectively breached the siege that Daesh militants had laid since January 2015.

Syrian troops and allied volunteer fighters had been advancing for months toward Dayr al-Zawr, the provincial capital city of the oil-rich province of the same name.

Daesh militants overran large parts of Dayr al-Zawr province, including its many oil fields, in mid-2014 as they seized areas in Syria and neighboring Iraq. By early 2015, the Takfiri terrorists were in control of parts of Dayr al-Zawr city, and besieged the remaining parts of it under government control.

It is estimated that 100,000 people remain in government-held parts of the city. The eastern province served as Daesh's main supply corridor to Iraq.