TEHRAN, September 10 - Senior leaders of the Organization of Islamic Cooperation (OIC) member states have stressed the importance of taking swift action to put an immediate end to the ongoing brutal violence against the Rohingya Muslims in Myanmar. 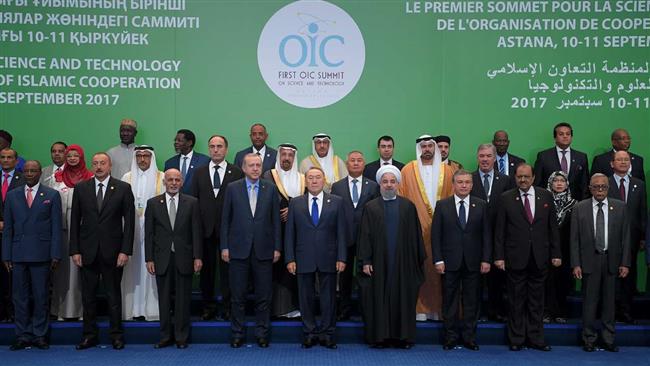 TEHRAN, Young Journalists Club (YJC) - On the sidelines of the first OIC summit on science and technology in Kazakhstan’s capital of Astana, the participants held an emergency meeting on the latest condition of the Rohingya Muslims amid the fresh wave of violence against the minority group and issued a statement.

The statement called for cooperation among Muslim countries aimed at dispatching humanitarian aid to the oppressed Rohingya and attending to the condition of the refugees.

The OIC leaders attending the Astana summit also expressed their deep concern about crimes and violence against the Rohingya Muslims.

Addressing the summit on Sunday, Iran’s President Hassan Rouhani underlined the need for unity and cooperation among Muslim countries as the key to rid the world of violence and reach permanent peace.

Myanmar's government alleged last October that its posts had been attacked by Muslim militants, using the purported assault as a pretext for a siege on Rakhine state. It claimed that another attack had been carried out on August 25 this year, triggering the recent brutal crackdown on the civilians in that state.

Since the beginning of the fresh wave of violence, counteroffensives by Myanmar’s army have killed hundreds of people, burned thousands of houses, razed a large number of villages and depopulated vast swathes of land in Rakhine state. However, Myanmar’s leader, Aung San Suu Kyi, has dismissed the Rohingya crisis as a misinformation campaign, rejecting the occurrence of any clampdown on the minority.

There have been numerous reports of summary execution, rape, and other abuses against Myanmar's Muslims since late last year.

Also on Sunday, foreign minister of Bangladesh said genocide was being waged in Myanmar's Rakhine state, triggering an exodus of nearly 300,000 Rohingya Muslims to his country.

Ali had a meeting with Western and Arab diplomats and the heads of UN agencies based in Bangladesh on Sunday to seek support for a political solution and discuss ways of delivering humanitarian aid to the Rohingya.

The Bangladeshi foreign minister told the diplomats that some 300,000 Rohingya Muslims had fled to his country in the past two weeks, increasing the total number of Rohingya refugees in Bangladesh to over 700,000.

"This is creating a huge challenge for Bangladesh in terms of providing shelter as well as other humanitarian assistance to them," a Foreign Ministry statement said.

At least two diplomats who attended the briefings said the minister told them as many as 3,000 people may have been killed in the latest round of violence, AFP reported.