Security Council to vote on US-drafted resolution on North Korea

TEHRAN, September 11 - The United Nations Security Council is set to vote on a revised US-drafted resolution to impose new sanctions on North Korea over its largest ever nuclear test just over a week ago, diplomats said. 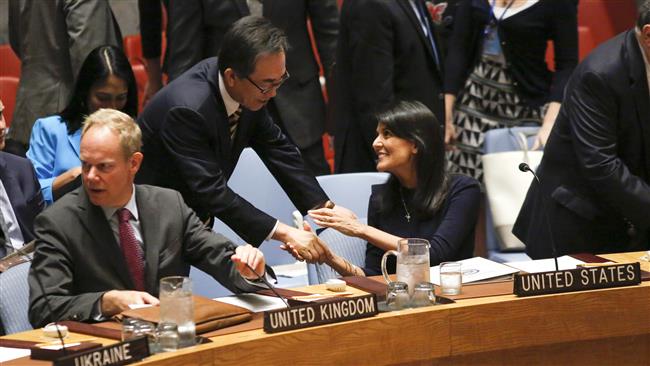 TEHRAN, Young Journalists Club (YJC) - According to the diplomats, the 15 Security Council members will vote later on Monday on the watered-down resolution, which no longer proposes blacklisting the North’s leader Kim Jong-un and reduces sanctions on the country’s oil and gas sectors, Reuters reported.

The initial draft had proposed a “progressive” oil embargo on Pyongyang, and called for a travel ban and asset freeze against Kim, along with four other North Korean officials, as well as restrictions on the country’s exports of textiles and the hiring of its laborers abroad.

The new version, seen by Reuters, has dropped the call for blacklisting Kim, and only lists one of the four officials. The oil embargo was also excluded from the final text, which instead seeks a ban on condensates and natural gas liquids.

It also keeps the proposal for restrictive measures against textile exports, which were North Korea’s second-biggest export after coal and other minerals in 2016.

If adopted, the resolution would be the eighth against Pyongyang since 2006. So far harsh sanctions have been imposed on the North over its ballistic missile and nuclear programs.

The latest round of sanctions was adopted just last month after Pyongyang launched two long-range missiles in July.

However, the punitive measures have so far failed to stop the North’s nuclear weapons program. Pyongyang says it needs to continue and develop its military program as a deterrent in the face of hostile policies by the United States and its regional allies, including South Korea and Japan.

The North conducted its sixth and biggest nuclear test on September 3. The hydrogen bomb was about three times more powerful than America’s atomic bomb that destroyed Hiroshima in 1945.

Earlier today, North Korea warned Washington against a new round of sanctions and said its retaliatory measures “will cause the US the greatest pain and suffering it had ever gone through in its entire history.”

Meanwhile, Japanese Prime Minister Shinzo Abe, who had formerly expressed his support for a new UN Security Council resolution, said on Monday that his country needs to boost its defenses in the face of North Korea’s threats.

“No one else will protect you if you don’t have the mindset of protecting yourself,” Abe told senior officers of Japan’s military on Monday.

“We have to take all appropriate measures against (incidents such as) North Korea's missile launch over Japan,” he added.

Abe further said that he had asked the Defense Ministry to draw up a blueprint for Japan’s medium-term defense strategy. He also called for “strengthening the Japan-US alliance.”

In another development, Chinese authorities said they have detected no radiation harm in the country’s border cities from the North’s latest nuclear test.

The Ministry of Environmental Protection announced on Sunday that the radiation level remains normal in Chinese provinces near the North Korean border.

“A comprehensive assessment has concluded that this DPRK nuclear test has caused no environmental impact on China,” the ministry said. “After eight days of continuous monitoring, no abnormal results were shown.”

The explosion caused by Pyongyang’s latest test was felt by residents in Chinese cities hundreds of kilometers from the border. According to international seismic agencies, it created an artificial 6.3-magnitude earthquake.