Russia to give due response to hostile US measures: Ryabkov

TEHRAN, September 12 - Russia’s deputy foreign minister says Moscow could impose more restrictions on the American diplomatic corps in the country in retaliation for Washington’s hostile measures against Russian diplomats and diplomatic facilities on US soil. 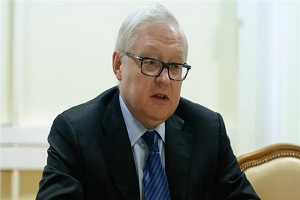 TEHRAN, Young Journalists Club (YJC) - “The conditions for the stay of US diplomats in Russia are being adjusted to reflect the restrictions established for our representatives,” a Russian Foreign Ministry statement quoted Sergei Ryabkov as saying Monday.

The statement was issued following Ryabkov’s meeting in Helsinki, Finland, with US Undersecretary of State for Political Affairs Thomas Shannon.

Ryabkov once again protested the “hostile actions by the United States and the US encroachment on diplomatic immunity,” urging Washington “to stop destroying Russian-American relations and undermining the international law, which is fraught with grave consequences, and start to search for solutions to the problems that have accumulated through no fault of ours.”
Ryabkov, the statement added, further told Shannon that Moscow planned to “accelerate” its lawsuit against Washington over the “seizures” of the Russian consulate in the city of San Francisco as well as two of its trade mission annexes in Washington DC and New York earlier this month.

Two other Russian properties were also shut down in the concluding days of the Obama administration back in December 2016.

According to Russian media, the meeting between the two senior diplomats did not generate a breakthrough.

Earlier in the day, Russian Foreign Minister Sergei Lavrov vowed that Moscow would introduce “full parity” into its ties with Washington following the closure of three diplomatic properties on US territory in early September.

Russian business daily Kommersant also reported that Moscow’s counter-measures could include a further cut in the number of American embassy staff, or a more symbolic response such as limiting the entry points for holders of US diplomatic passports and reducing the number of parking spaces outside mission buildings.

US authorities notified the Russian Foreign Ministry on August 31 that it must vacate its consulate general in San Francisco, the trade mission building in Washington DC, and the leased offices of the Russian trade mission in New York within three days.

American officials then searched and seized control of the consulate and the Washington trade mission on September 2, without regard for the diplomatic status of the buildings.

“The steps, including searches of premises enjoying diplomatic immunity that were conducted by the US security services under threat of the use of force, are a flagrant violation of the Vienna Convention on Diplomatic Relations and the bilateral Consular Convention. In addition, serious restrictions were imposed on the freedom of movement of our diplomats,” the Russian Foreign Ministry stated following the US move.

Share to
Related News
Pres. Rouhani calls for closer Tehran-Helsinki ties
Russia ‘may cut number of US diplomats to 300 or fewer’
There’s no spirit, there’s deal, and Iran is compliant with it: Former Obama official
Japan, South Korea welcome new US sanctions against Pyongyang
Greek Prime Minister: 'We Are Leaving Grexit and Heading to Grinvest'
France must scrap own nuclear arsenal instead of criticizing Pyongyang: North Korea
US, Russia diplomats to talk amid tensions
Tags
russia ، us ، hostile
Your Comment