TEHRAN, September 12 - Afghanistan has urged India to speed up development of Iran’s strategic port of Chabahar which is on a course to open a transport corridor to landlocked Central Asian nations. 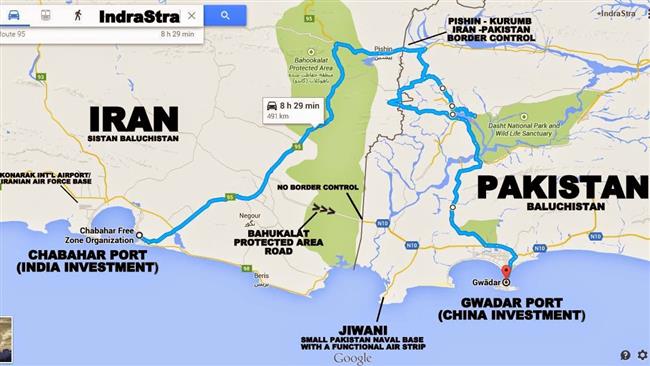 Afghans see the route central to their hope of streamlining trade with India and boosting access to markets in India, Europe, the Middle East, and the world beyond.

The port would also allow India to transport goods to Afghanistan by sea and provide access to Central Asia.

On Monday, Swaraj told Rabbani that India would step up the development work and begin supplying wheat to Afghanistan within weeks through Chabahar.

India is said to have committed up to $500 million for development of Chabahar along with associated roads and rail lines but an Iranian developer said Monday the Indian investment is only $85 million.

Managing Director of Aria Banader Iranian Co. Yaser Ebrahimi said his company has undertaken to supply land and sea equipment for the port under a build-operate-transfer (BOT) agreement worth $403 million.
“Indians are expected to invest only $85 million in Chabahar, and this is not a big figure compared to $403 million of investment being made by Aria Banader.”

However, the state-owned Indian company India Ports Global Limited (IPGL), which is developing Chabahar, will provide $150 million in finance to the Ports and Maritime Organization of Iran for purchases, Ebrahimi said.

Speaking to reporters in Chabahar Monday, the official outlined some of the equipment supply deals which his company has signed with the firms dominating the market for customized equipment to develop jetties and container terminals.

The first batch of equipment worth $21 million arrived in Chabahar from Germany in February last year, which included 9 Liebherr cranes, he said.
The second batch worth $10 million, including 13 reach stacker vehicles for handling intermodal container containers, is about to arrive from Germany on Tuesday.

And the third batch worth $20 million of grain suction equipment is being built jointly by Germany’s NAIRO and Iran’s Machine Sazi Arak, Ebrahimi added.

Another German company is building two marine exploration and rescue boats with the participation of Iran’s Defense Industries Organization, he said, stating that a Dutch company is jointly building other equipment.

“We make all our purchases through international tenders, and we buy only from the manufacturer without any intermediaries,” the official said.

Iranian companies are also building a mechanized cereals storing silo with a capacity of 100,000 tonnes and a 5,000-megawatt power station in Chabahar.

“Currently, the overall development of the Chabahar port under Aria Banader’s $403 million contract is estimated at 37%,” Ebrahimi said.

His account of physical progress contradicts Western media reports that manufacturers were shying away from supplying equipment for development of Chabahar for fear the United States may reimpose sanctions on Tehran.

They have specifically cited Swiss engineering group Liebherr, Finland’s Konecranes and Cargotec to have turned down requests to take part in the bids because their banks allegedly were not ready to facilitate transactions involving Iran.

Share to
Related News
Over 1,000 US troops to patrol with Afghans in 2018: US general
Longest war in US history
Trump unveils new strategy to prolong military presence in Afghanistan
Trump's blames Afghanistan's neighbors and devises his own new strategy
Tags
afghans ، india ، afghan
Your Comment