Ukraine launches joint war games with US, NATO forces ahead of Russia drills

TEHRAN, September 12 - Ukraine is holding joint war games with the US and a number of NATO member countries in the western city of Yavoriv near the Polish border as neighboring Russia gets set for its own drills in the Balkans. 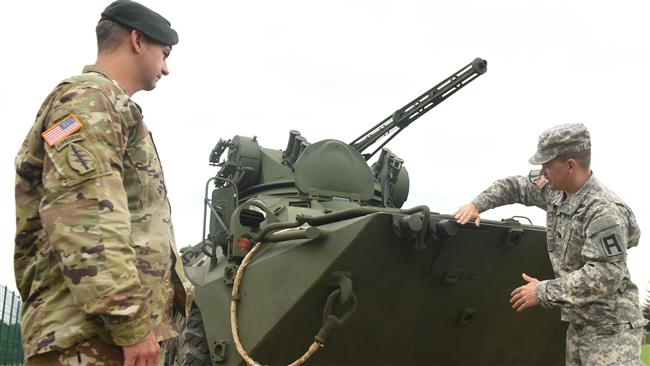 TEHRAN, Young Journalists Club (YJC) - The annual Rapid Trident military maneuvers commenced on Monday, involving an “unprecedented” number of 2,500 troops from 15 NATO members and are due to continue until September 23, the Ukrainian military announced in a statement.

“Today, your support is very important for us. The experience of our colleagues is extremely valuable for the Ukrainian army,” said Ukrainian co-director of the war games, Colonel Sergei Litvinov.

The military exercise was launched just days ahead of major Russian maneuvers with Belarus, code named Zapad 2017, which are scheduled to take place between September 14 and 20 around the Baltic Sea, western Russia, Belarus and the Russian exclave of Kaliningrad.

Moscow says the military drills will involve nearly 12,700 troops, but NATO Chief Jens Stoltenberg as well as leaders of some members of the Western military alliance have claimed as many as 100,000 troops could take part in Zapad exercises.

Stoltenberg expressed concern on Friday over what he described as Russia’s looming failure to live up to its international obligations to allow observers for its military drills with Belarus.

Moscow has also been wary of the US-led alliance’s persisting military buildup near its border -- where NATO has deployed nearly 4,000 troops, consisting of four battle groups, to Estonia, Lithuania, Latvia and Poland in recent years -- viewing it as a threat to its national security.

Share to
Related News
US to pay $5mn for Estonia's new radar on Russian border
US supply of lethal arms to Ukraine won’t help stability: Russia
Zapad-2017: Why Poland's Media Getting Hysterical Over Russia-Belarus Drills
Russia ‘to urge US to stay in Iran nuclear deal’
Tags
Ukraine ، war game ، US ، NATO
Your Comment