TEHRAN, September 13 - South Korea has confirmed that the traces of radioactive xenon gas it recently detected were from a North Korean nuclear test earlier in the month. 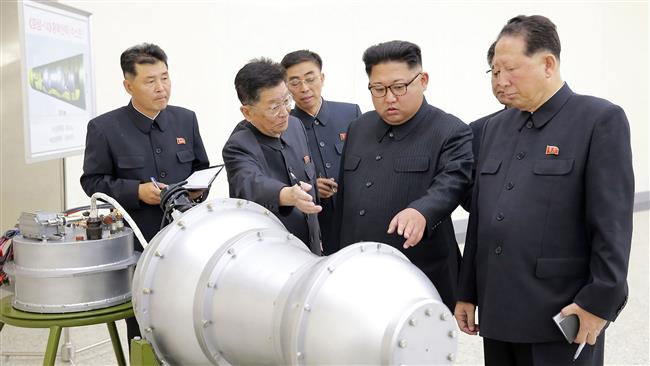 TEHRAN, Young Journalists Club (YJC) - The South Korean Nuclear Safety and Security Commission (NSCC) explained on Wednesday that its land-based detector in the country’s northeast had discovered traces of xenon-133 isotope on nine occasions, while its mobile device near the country’s east coast had detected traces of the isotope four times.

“It was difficult to find out how powerful the nuclear test was with the amount of xenon detected, but we can say the xenon was from North Korea,” said executive commissioner Choi Jongbae in a press conference in the capital, Seoul.

He said, however, that the commission was unable to confirm what kind of nuclear test the North had conducted.

North Korea said on September 3 that it had conducted a successful hydrogen bomb test and that the bomb was small enough to fit on a missile.

The NSCC said the xenon detected had no impact on South Korea’s environment and population.

Xenon is a naturally occurring, colorless gas used in manufacturing some lights. But the detected xenon-133 is a radioactive isotope that does not emerge naturally and has been linked to nuclear tests by Pyongyang in the past.

The North Korean test, which was the country’s sixth, prompted the United Nations Security Council (UNSC) to escalate sanctions against Pyongyang by imposing new bans on the country’s textile exports and a limit on its fuel supplies.

Meanwhile, Seoul announced on Wednesday that it had conducted its first live-fire drill for an advanced air-launched cruise missile in a bid to strengthen the country’s pre-emptive strike capability against North Korea.

The Taurus missile launched from an F-15 jetfighter traveled through obstacles at low altitudes before striking a target off the South's western coast, the Defense Ministry said.

The missile, manufactured by Germany's Taurus Systems, is reported to have a maximum range of 500 kilometers and its stealth characteristics allow it to avoid radar detection.

North Korea, however, reacted to the “evil” sanctions by vowing on Wednesday to further step up its weapons programs.

“The adoption of another illegal and evil ‘resolution on sanctions’ piloted by the US served as an occasion for the DPRK (North Korea) to verify that the road it chose to go down was absolutely right,” said the North’s Foreign Ministry in a statement published by the state-run KCNA news agency.

“The DPRK will redouble the efforts to increase its strength to safeguard the country’s sovereignty and right to existence,” it added.

The US-drafted resolution was passed unanimously on Monday, just a month after the UNSC decided to ban exports of coal, lead, and seafood in response to Pyongyang’s launch of an intercontinental ballistic missile (ICBM).

The North Korean ministry described the newer resolution as “heinous provocation aimed at depriving the DPRK of its legitimate right for self-defense and completely suffocating its state and people through full-scale economic blockade.”

US President Donald Trump said on Tuesday that the new sanctions on the North were a small step.

“I don’t know if it has any impact, but certainly it was nice to get a 15-to-nothing vote, but those sanctions are nothing compared to what ultimately will have to happen,” Trump said in vague but threatening remarks.

Moreover, US Treasury Secretary Steven Mnuchin warned officials in China, which is Pyongyang’s key ally and trading partner, that if it did not follow through on the new sanctions, Washington would “put additional sanctions on them and prevent them from accessing the US and international dollar system.”

Asked if Trump was considering other moves, including cutting off Chinese banks from the US financial system, White House spokeswoman Sarah Sanders said, “All options are on the table. The president has also said that he wants every country involved to step up and do more.”

The US’s initial draft of the sanctions resolution had to be watered down to win the backing of China and Russia, which are both UNSC veto-wielding powers. It stopped short of imposing a full embargo on oil exports to North Korea, most of which come from China.

‘Magnitude of North Korea test much higher than formal estimates’

Meanwhile, a US monitoring group also said on Wednesday that North Korea’s latest nuclear test had had a yield of 250 kilotons, which is much higher than earlier, official estimates.

The authoritative US website 38 North, which is linked to the Johns Hopkins University, said that it was lifting its estimate for the yield of the blast to “roughly 250 kilotons.”

The figure is more than 16 times the size of the 15-kiloton US bomb that destroyed the Japanese city of Hiroshima in 1945.

Other official estimates of the yield vary from South Korea’s 50 kilotons to Japan’s 160.