TEHRAN, September 13 - Iran’s ambassador to the International Atomic Energy Agency (IAEA) says the US administration’s recent moves with regard to the Iranian nuclear agreement, known as the Joint Comprehensive Plan of Action (JCPOA), run counter to the deal. 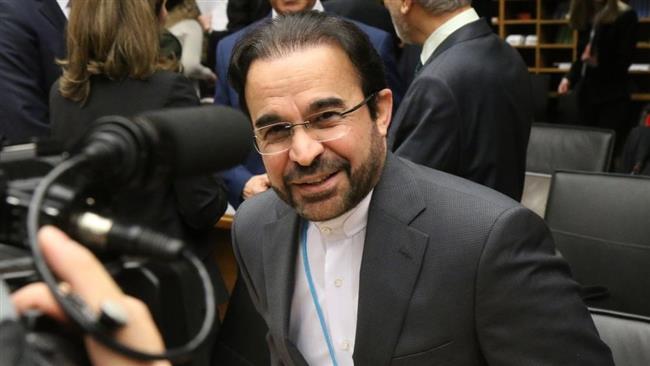 TEHRAN, Young Journalists Club (YJC) - Reza Najafi made the remarks while speaking to a quarterly meeting of the IAEA’s 35-member Board of Governors in Vienna on Wednesday.

After more than 20 months, the implementation of the JCPOA by the other side, especially the US, is not acceptable yet, Najafi said, adding that the US administration has adopted an unconstructive approach against the spirit and letter of the agreement to undermine its successful implementation.

The Iranian envoy said a recent visit by a US official to Vienna was aimed at undermining the credibility of the UN nuclear body and an instance of Washington’s sinister intention and insincere behavior.

Najafi warned that exerting pressure on the IAEA would adversely affect the professional and impartial nature of the agency's duty to carry out the job entrusted to it by UN Security Council Resolution 2231, which was adopted on July 20, 2015 to endorse the nuclear deal, and would consequently weaken the independence and credibility of it.

Like any other agreements, the JCPOA is based on acting in accordance with mutual commitment, in good faith and in a constructive atmosphere, he added.

The US ambassador to the United Nations, Nikki Haley, travelled to Vienna last month to speak with IAEA Director General Yukiya Amano about Iran’s nuclear agreement.

The US is putting pressure on the IAEA to inspect Iranian military sites, a demand rejected by Tehran which says the information with regard to the Islamic Republic’s military sites are classified and access to such locations, specially by the US, is out of the question.

Iran says the US demands for access to its military sites are aimed at politicizing the JCPOA and that issues pertaining to Tehran’s defense capabilities are non-negotiable.

On Monday, Amano said Iran was abiding by the rules set out in the nuclear accord it signed with the P5+1 group of countries in 2015, Presstv reported.

“The nuclear-related commitments undertaken by Iran under the (deal) are being implemented,” Amano said in the text of a speech to the Board of Governors.

"The verification regime in Iran is the most robust regime which currently exists. We have increased the inspection days in Iran, we have increased inspector numbers ... and the number of images has increased," he said, adding, "From a verification point of view, it is a clear and significant gain."

Elsewhere in his remarks, Amano noted that the IAEA did not distinguish between civilian or military sites in its inspections and would ask for access when necessary.

Share to
Related News
Iran says US policies root of insecurity, threat in region
IAEA chief calls for clarity on disputed section of Iran nuclear deal
Leaving JCPOA will isolate US: Iran official
Even if US withdraws nuclear deal, Iran will adhere to it: AEOI chief
Tags
Iran ، US ، IAEA
Your Comment