US has become more an 'oligarchy than a democracy’: Jimmy Carter

TEHRAN, September 13 - Former US President Jimmy Carter has warned that money in politics has made the United States more like an “oligarchy than a democracy” and described President Donald Trump’s foreign and domestic policies as a failure. 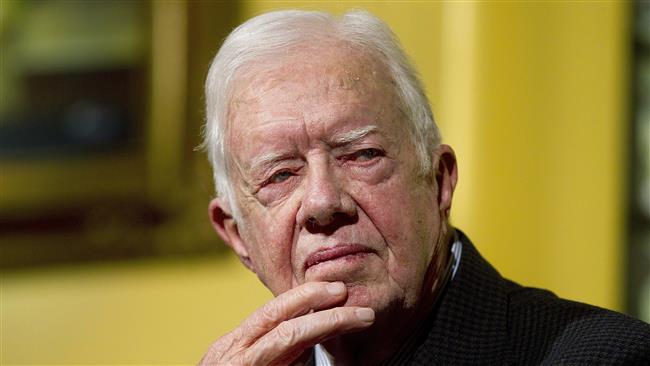 TEHRAN, Young Journalists Club (YJC) - Speaking on Tuesday at the Carter Center in Atlanta, Georgia, the 39th president offered a damning indictment of US foreign policy and domestic affairs and was particularly critical of the nation's direction under Trump’s leadership.

Carter said the US should engage directly with North Korean leader Kim Jong-un, and discuss a peace treaty to replace the cease fire that ended the Korean War in 1953.

"I would send my top person to Pyongyang immediately, if I didn't go myself,” he said.

Carter further said that North Koreans want a treaty that guarantees the US will not attack unless North Korea attacks the US or an ally, particularly South Korea.

"Until we talk to them and treat them with respect — as human beings, which they are — I don't think we're going to make any progress," He added.

Carter noted that he's been three times to North Korea, even as successive US administrations have refused to deal with Pyongyang.

Carter did not mention explicitly Trump's threatening exchanges this summer against Pyongyang. Last month, Trump warned that North Korea would face “fire and fury” should it continue to threaten the United States.

Experts on North Korea have warned that aggressive rhetoric could backfire on Trump, convincing Pyongyang that it is in imminent danger and triggering what he sees as a pre-emptive attack.

Carter also rejected Trump's optimism that he can bring peace to the Middle East.

Trump has tasked his adviser and son-in-law, Jared Kushner, with attempting to resolve the Israeli-Palestinian conflict that has frustrated US administrations for decades.

Carter said he is "practically hopeless" that anything Trump comes up with would give "justice to the Palestinians."

More than eight months into his presidency, Trump has yet to make a clear stance on the issue and his statements have always been tainted by a degree of bias towards Israel.

"I don't think Trump or his family members are making any process in that respect," he said.

Carter criticized Israeli Prime Minister Benjamin Netanyahu, a Trump ally, for having "no intention at all of having a two-state solution.