TEHRAN, September 14 - Iranian Foreign Minister Mohammad-Javad Zarif and Russian President Vladimir Putin stressed that all parties of Iranian nuclear deal have to comply with their commitments mentioned in the deal. 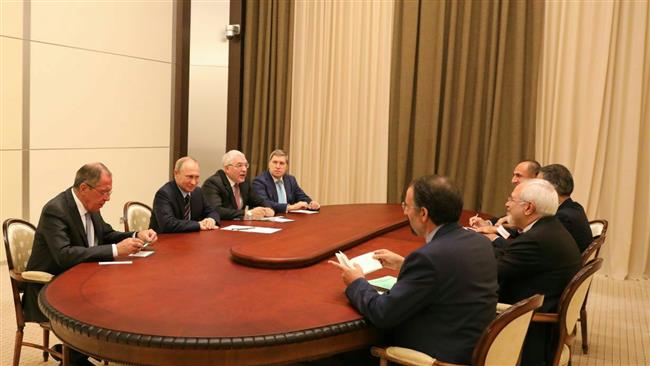 Zarif also called his meeting with Putin “substantial and positive.”

He also said that as to the nuclear deal, officially known as the Joint Comprehensive Plan of Action (JCPOA), the two sides emphasized that the agreement is non-negotiable and that all involved parties have to abide by their commitments.

“The Islamic Republic of Iran has so far fulfilled all its commitments concerning the JCPOA, but unfortunately certain sides have not stayed committed as they should.

Today, we stress that this (the JCPOA) is an international and multilateral agreement and that all sides should adhere to it,” he added.

Zarif added that he also discussed the Syrian crisis with the Russian president, stressing Moscow and Tehran have had good cooperation in the battle against terrorism.

The Iranian foreign minister said that Iran, Russia and Turkey are due to continue talks on Syria in the Kazakh capital Astana to discuss ways to restore peace to the Arab country, deliver humanitarian aid and initiate a political process aimed at resolving the country's crisis.

Zarif said that the two sides also discussed the expansion of ties in different fields, including cooperation in the defense, nuclear energy, transportation and energy sectors, Presstv reported.

Iran and the five permanent members of the United Nations Security Council – the United States, France, Britain, Russia and China – plus Germany signed the JCPOA on July 14, 2015 and started implementing it on January 16, 2016.

On Monday, the director general of the International Atomic Energy Agency, Yukiya Amano, said Iran was abiding by the rules set out in the nuclear accord it signed with the P5+1 group of countries.

“The nuclear-related commitments undertaken by Iran under the (deal) are being implemented,” Amano said in the text of a speech to the Board of Governors.