TEHRAN, September 14 - At least 24 people, mostly teenagers, have been killed in a fire that broke out in an Islamic school dormitory on the outskirts of the Malaysian capital of Kuala Lumpur, officials said. 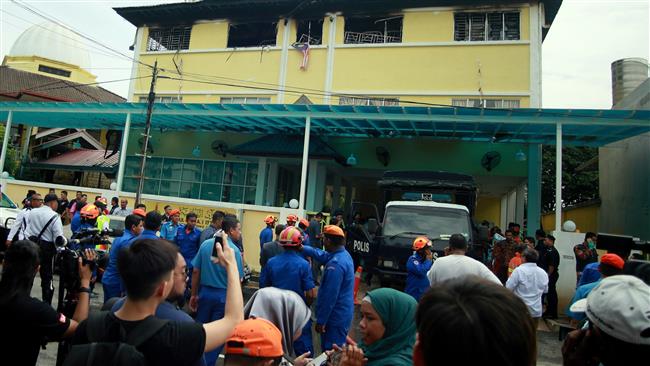 TEHRAN, Young Journalists Club (YJC) - The tragic incident occurred in the Darul Quran Ittifaqiyah — a three-storey boarding school where students learn to memorize the holy Quran — around 05:40 a.m. local time (2140 GMT) on Thursday, when a blaze began in the sleeping quarters on the top floor and trapped students in the building, police said in a statement.

Kuala Lumpur Police Chief Amar Singh further said that police had found at least 24 charred bodies, 22 of them boys between 13 and 17, and two wardens. “We believe (they died of) suffocation... the bodies were totally burnt,” he said.

It took firefighters an hour to extinguish the fire.

Singh said firefighters managed to rescue 14 other students and four teachers, and that six of the people saved had been hospitalized in critical condition.

According to some witnesses, desperate students were crying for help after the fire broke out.

“The children were desperately trying to escape the flames. There were metal grills that prevented them from exiting the burning building,” said Federal Territories Minister Tengku Adnan Tengku Mansor in a television interview after the incident.

Police have launched an investigation to determine the cause of the fire. Officials suspected an electrical short circuit, with Singh saying that no foul play had likely been behind the incident, Presstv reported.