Public inquiry into the Grenfell Tower fire opens in London

TEHRAN, September 14 - A public inquiry into the Grenfell Tower fire opens in London three months after the devastating blaze tore the 24-stories high-rise and claimed dozens of lives. 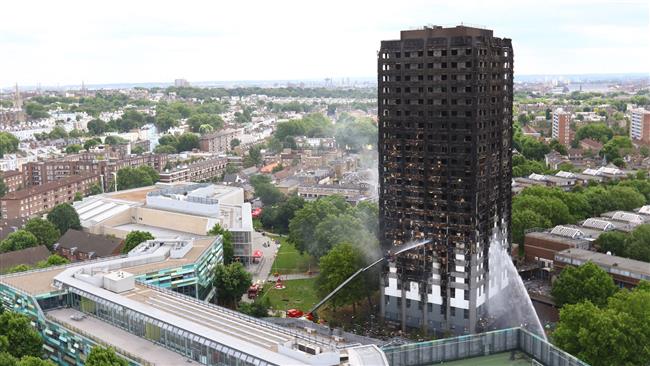 TEHRAN, Young Journalists Club (YJC) - The head of the investigation, retired judge Sir Martin Moore-Bick, will give a 45-minute statement later today, which will be watched by residents and victims.

The Thursday session will examine the cause and spread of the June inferno as well as the design, construction and the refurbishment of the tower block that was part of a deprived housing estate in a rich London borough.

Police believe at least 80 people have died due to the Grenfell Tower tragedy, which sparked a debate about social inequalities nationwide.

Moore-Bick has previously faced criticism and barracking at a public consultation meeting from some in the community who feel he knows little about public housing or the area.

Two separate campaign groups representing the victims, their relatives and the community issued separate statements, complaining that confidence in a fair inquiry was repeatedly being undermined.

It emerged that a High Court application for a judicial review brought by black and minority ethnic lawyers was blocked just two days before the inquiry was due to start.

The lawyers had called on Theresa May to select a panel reflecting the diverse racial and religious make-up of the community to sit on the inquiry with powers to make recommendations.

However, that application was rejected prompting BMELawyers4Grenfell to declare, “We, and the community, have been ignored at every turn.”

Labour MP for Kensington Emma Dent Coad said they needed somebody they could trust, not a “technocrat” who lacked what he called “credibility.”

Speaking ahead of the inquiry, she said she was doubtful it would answer the questions: who was accountable, why was the fire “allowed to happen” and are we going to change the funding of social housing?

She also said the inquiry should look at how social tenants are seen by the wider society: “There’s a lot of people who treat social tenants as less than human,” she told BBC Breakfast.