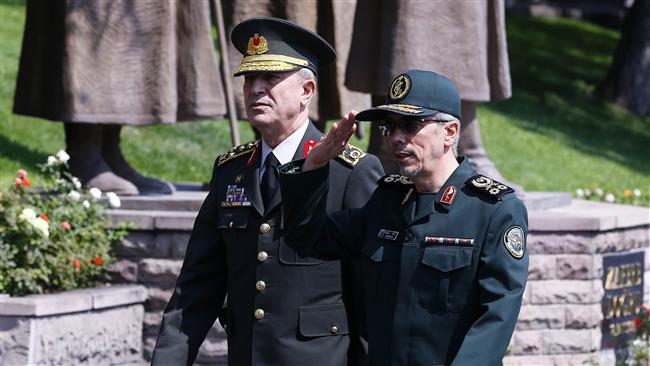 TEHRAN, Young Journalists Club (YJC) - Iranian military Chief of Staff Mohammad Baqeri and his Turkish counterpart, Hulusi Akar, said the fallout from the plebiscite on the regional security, peace and stability would be grave.

They also underlined the need for coordination among Iraq’s neighbors to oppose the referendum and block secessionist plans in the region that could result in multiple political, social and security problems.

Moreover, the two generals discussed grounds for cooperation between Iranian and Turkish armed forces and stressed the importance they attach to boosting bilateral ties.

They further denounced the "inhumane and oppressive behavior" of the Myanmar regime, calling on Muslim countries and international bodies, particularly the United Nations, to take serious action toward stopping genocide and displacement of the Rohingya Muslims.

Baqeri and Akar also stressed the need for dispatch of humanitarian aid to the oppressed Myanmar Muslims to be expedited.

The Kurdish referendum is scheduled for September 25, but the central government in Baghdad as well as regional players like Iran and Turkey are opposed to the vote.

On Tuesday, the Iraqi parliament voted against the plebiscite, prompting a walkout by Kurdish lawmakers, Presstv reported.

Iraqi Parliament Speaker Salim al-Jabouri said the vote made it incumbent on the government to “take all steps to protect the unity of Iraq and open a serious dialog” with Kurdish officials.

Additionally, the Arab League rejected the referendum as an illegal measure that would pose further threats to security in the already volatile Middle East.