People rally in Philippines to demand withdrawal of US forces

TEHRAN, September 15 - Police in the Philippines have clashed with protesters during an anti-US rally near the American Embassy in the capital city, Manila. 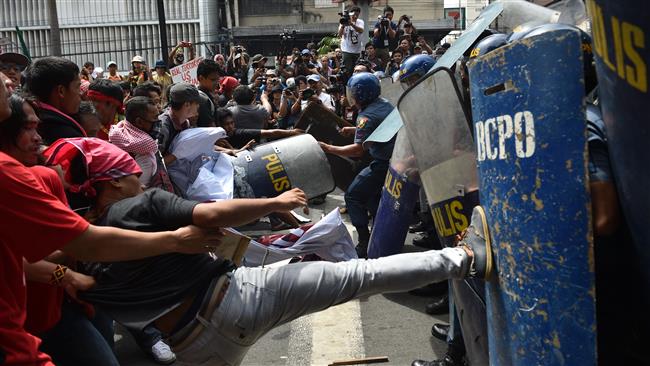 TEHRAN, Young Journalists Club (YJC) - The anti-US protesters called for an end to the US military presence in their country during the rally on Friday.

The protesters accused the US of sponsoring state terrorism and condemned Washington’s military intervention in Mindanao, in southern Philippines, where US forces are reportedly assisting government military operations against Daesh-linked militants.

The Muslims protesters in the rally held mass prayers.

The protesters, who burned an effigy of US President Donald Trump and Philippine President Rodrigo Duterte, called for an immediate pullout of the US troops from the country.

The protesters marched to the US Embassy to commemorate the Philippine Senate’s vote in 1991 to end US military presence in the country.

The US signed a Military Bases Agreement with the Philippines in 1947, which allowed the US to establish and operate air and naval bases for 99 years.

On September 16, 1991, 12 senators led an effort to end US military presence in the Philippines.

Back then, the US Naval Base Subic Bay, known to be the largest US military naval base in Asia, was one of the strategic bases for the US, home to more than 7,000 American servicemen and civilian workers. Other key US military installations in the Philippines in 1991 were Clark Air Base in Pampanga – formerly known as Fort Stotsenberg – and Camp John Hay in Baguio City.

By a vote of 12-11, US military presence was rejected at the Senate in a vote led by the 12 senators, whom the media later dubbed the “Magnificent 12.”

On December 21, 1992, the 1947 Military Bases Agreement was terminated and the US bases were turned over to the Philippine government.

US troops were allowed rotational presence in Philippine military bases after that.