TEHRAN, September 16 - The political and media adviser to Syrian President Bashar al-Assad says government troops, backed by fighters from allied popular defense groups, will fight any force, including the US-backed militia, to fully liberate the Arab country plagued with terrorism for over six years. 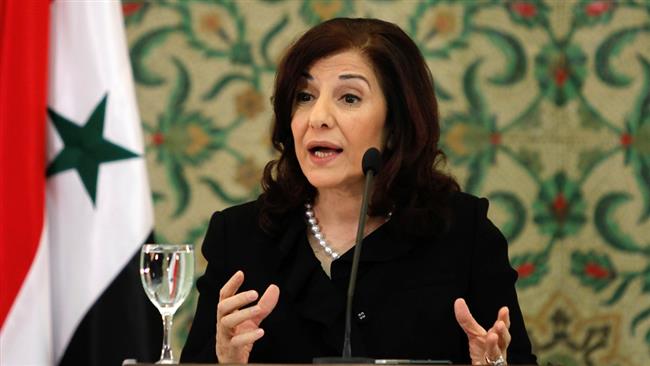 TEHRAN, Young Journalists Club (YJC) - “Whether it’s the Syrian Democratic Forces (SDF), or Daesh or any illegitimate foreign force in the country... we will fight and work against them so our land is freed completely from any aggressor,” said Bouthaina Shaaban in an exclusive interview with Lebanon-based Arabic-language al-Manar television network on Friday.

She added that the US-backed SDF forces had managed to capture areas in northeastern Syria from Daesh “without any fighting,” implying that the Takfiri militants were working hand in glove with the SDF to take oil-rich areas.

“But they will not get what they want,” the Syrian official added.

The SDF is a coalition of Kurdish and Arab fighters dominated by the Kurdish People's Protection Units (YPG), which is in control of large parts of northeastern Syria for many years. The SDF forces have gained ground against Daesh in the northern city of Raqqah, the terror group’s de facto capital in the Arab country.

The US and its allies have been bombarding what they call Daesh positions inside Syria since September 2014 without any authorization from the Damascus government or a UN mandate. They also support some groups, such as the SDF, claiming that they help them in their alleged fight against Daesh terrorists.

Different foreign-backed terrorist groups have been wreaking havoc in Syria since 2011. The government controls the main urban centers in the west of the country and has recaptured much of the eastern desert from Daesh in recent months.

On Tuesday, Lieutenant General Aleksandr Lapin, the Russian chief of staff in Syria, announced that Damascus was in control of 85 percent of the Arab country’s territories. He added that Syrian forces must now purge terrorists from the country's remaining 15 percent, which amounts to 27,000 square kilometers.