Russia ‘to urge US to stay in Iran nuclear deal’

TEHRAN, September 16 -Russia plans to convey a message to the United States asking Washington to stay in a 2015 multilateral deal with Iran. 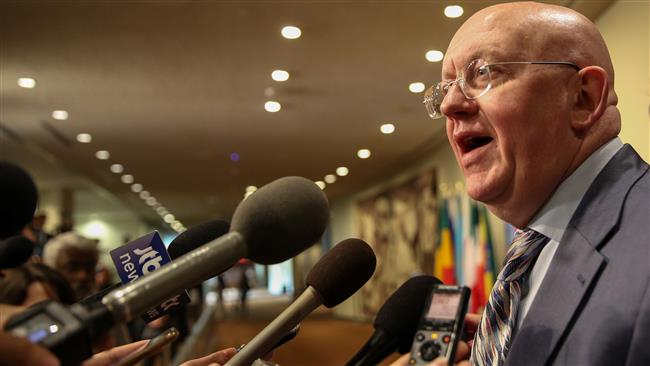 TEHRAN, Young Journalists Club (YJC) -Russia’s Ambassador to the United Nations (UN) Vasily Nebenzya said on Friday that Moscow would be delivering the message in a likely meeting of the parties to the deal next week.

Iran’s partners under the deal are Russia, China, Germany, France, the United Kingdom, and the US. All the parties to the deal are determined to sustain it except Washington, which seems to be planning a unilateral withdrawal.

Meanwhile, the foreign ministers of Iran and the six other countries are likely to meet to discuss the deal on the sidelines of the 72th session of the UN General Assembly in New York next week.

Nebenzya said Moscow’s message to Washington during the meeting would be, “Stay in the JCPOA. That’s right. That’s very important, indeed.” The JCPOA is the official abbreviation for the deal, the Joint Comprehensive Plan of Action.

“That is not only our message, but the rest of the participants and those that are outside are trying to send this message across,” he added.

The JCPOA was reached in July 2015 and took effect in January 2016. Under the deal, Iran applied some limits to its nuclear program in exchange for the termination of all nuclear-related sanctions against it.

The International Atomic Energy Agency (IAEA), which is tasked with monitoring the technical aspect of the JCPOA’s implementation, has repeatedly verified full Iranian compliance with the agreement.

However, the administration of US President Donald Trump, which took over in January 2017, one year after the JCPOA came into force, has been opposed to the accord and is believed to be actively seeking a pretext to potentially withdraw.

Last month, US Ambassador to the UN Nikki Haley traveled to Vienna to press the IAEA to request access to Iran’s military sites, a move that Washington hoped would undermine the deal.
The IAEA withstood that pressure.

The Trump administration on Thursday extended some sanctions relief for Iran under the deal. It has twice verified Iranian compliance in notifications to the US Congress under an American law. But the administration has signaled that a third verification — due in mid-October — would not be forthcoming.

“You’ll see what I’m going to be doing very shortly in October. But I will say this: The Iran deal is one of the worst deals I’ve ever seen,” Trump said on Thursday.

Thus, if the US Congress does not renew waivers of nuclear-related sanctions against Iran because the White House has refrained from verifying Iranian compliance, a major non-performance of the deal will have occurred on the part of the US.

The European Union (EU)’s foreign policy chief, Federica Mogherini, has made it clear that the party to judge Iranian compliance is not the US administration but the IAEA and a Joint Commission that she chairs.