About 1.5 million homes and businesses in US without power

TEHRAN, September 16 -About 1.5 million homes and businesses in Florida and Georgia remained without power on Friday after Hurricane Irma, including 46 of Florida's nearly 700 nursing homes caught in the deadly storm's path. 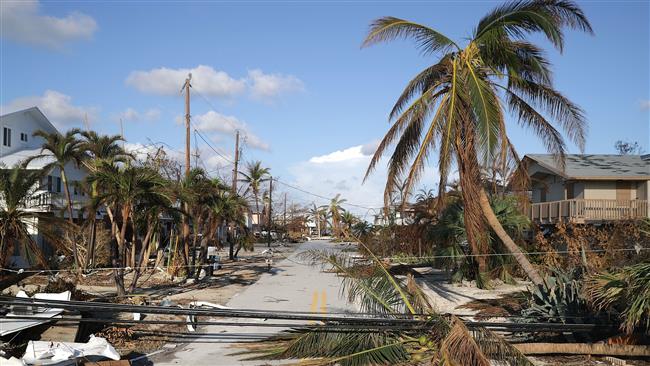 TEHRAN, Young Journalists Club (YJC) -Irma, which ranked as one of the most powerful Atlantic storms on record before striking the US mainland as a Category 4 hurricane on Sept. 10, killed at least 84 people. Several hard-hit Caribbean islands, including Puerto Rico and the US Virgin Islands, suffered more than half the fatalities.

Florida Power & Light, owned by NextEra Energy Inc and the state's biggest electric company, said it was working aggressively to restore power to the 23 percent of its customers still in the dark.

The utility has never before had to deal with a storm affecting its entire service territory, company spokesman Rob Gould said.

"It will go down as one of the largest and most complex restoration efforts in history," he said. "Now we are literally into the house-to-house combat mode."

The storm's death toll grew to at least 33 people in Florida after a woman died of suspected carbon monoxide poisoning from a generator in Palm Beach County, the Palm Beach Post newspaper reported.

A total of eight others died in Georgia and the Carolinas. North Carolina reported its first Irma death on Friday, saying a man there also had died of carbon monoxide poisoning from a generator.

Eight elderly people died earlier this week after being exposed to the heat inside a nursing home north of Miami that had been left without full air conditioning after the hurricane hit.

The deaths at the Rehabilitation Center at Hollywood Hills, now under police and state investigation, stirred outrage over what many saw as a preventable tragedy and heightened concerns about the vulnerability of the state's large elderly population amid widespread, lingering power outages.

"The governor will continue to review all ways to ensure tragedies like this never happen again," Lauren Schenone, a spokeswoman for Florida Governor Rick Scott, said in a statement.

Florida's healthcare agency ordered the nursing home on Thursday to be suspended from the state Medicaid program. The center said it plans to the fight the state's efforts to shut it down.

A timeline of events issued by the nursing home shows administrators repeatedly called Florida Power & Light and state officials after a transformer powering its air conditioning system went out during the storm on Sunday. The center said it was informed that service would soon be fixed.

Nursing home operators had put out cooling units and fans in an effort to maintain reasonable temperatures and added additional cooling units supplied by a hospital next door on Tuesday.

But it was not until multiple patients began experiencing health emergencies, which prompted the evacuation of the center, that the utility company arrived to make the repair, the nursing home said.

However, officials at the Florida Department of Health said the facility did not indicate the extent of its problems nor requested assistance in reports to a state monitoring database. In its status reports, the center indicated that its cooling system was operational for much of the time, according to the state.

Share to
Related News
Maria weakens into tropical storm, to move away from U.S.: NHC
Justice Department to limit Obama-era program that oversees police violence
Approval of US Congress remains near historic lows: Poll
US has become more an 'oligarchy than a democracy’: Jimmy Carter
Pentagon still preparing for global warming despite Trump’s order to stop
Tags
us ، power ، business
Your Comment