TEHRAN, September 16 -Iraqi Kurdish legislators of the country’s semi-autonomous Kurdistan region have approved a plan to hold a referendum on independence from Baghdad later this month, a contentious move spearheaded by regional President Masoud Barzani that has faced bitter opposition from the central government and several other countries, including neighboring Iran, Turkey and Syria. 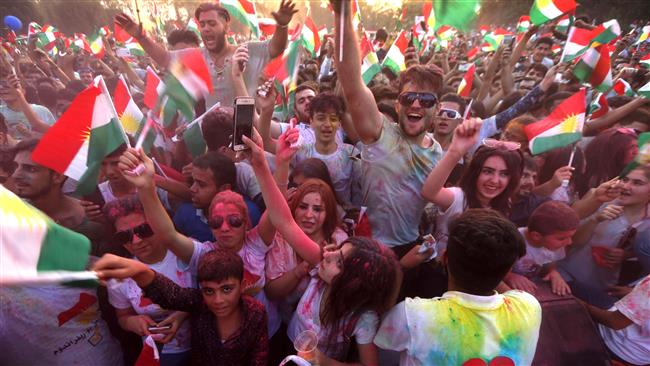 TEHRAN, Young Journalists Club (YJC) -In open defiance of Baghdad’s strong disapproval of the referendum, 65 out of the 68 Kurdish lawmakers present in the regional parliament on Friday voted in favor of the September 25 polls as opposition legislators boycotted the parliament’s first session in two years.

The plan for the non-binding Kurdish referendum was approved in the Iraqi city of Erbil, the capital of a northern province with the same name, in the 111-seat parliament consisting of Barzani's Kurdistan Democratic Party (KDP), the Patriotic Union of Kurdistan (PUK) of Iraq's former president, Jalal Talabani, and the independent Goran and Jamaa Islamiya opposition parties.

On Tuesday, Iraqi Prime Minister Haider al-Abadi slammed the planned vote as “unconstitutional,” calling on the Kurdish leadership to come to Baghdad and conclude a dialogue. The premier’s remarks came after the Iraqi House of Representatives voted to reject the poll on the Kurdish region's independence.

The Iraqi parliamentarians urged the prime minister to take all necessary measures to maintain the unity of Iraq and start a serious dialogue with the Kurdistan region to resolve the pending issues.

Turkey has already censured efforts to establish an independent Kurdistan as “a grave mistake.” Ankara says the potential creation of an independent Kurdish state in its backyard would further embolden Turkey’s homegrown Kurdistan Workers’ Party (PKK) militants toward an even stiffer confrontation with the government.

Meanwhile, Turkish President Recep Tayyip Erdogan said in a televised interview that Ankara would hold a high-level security meeting on September 22 to decide on how to respond to the plebiscite, saying the Kurdish leadership was suffering from “serious political ineptitude.”

The Turkish president said Barzani's decision not to postpone the independence referendum later this month is "very wrong."

"Mr. Barzani is well aware of what we think about this matter. I think his statement is very very wrong, because he is well aware of our sensitivities about the territorial integrity of Iraq," the Turkish president stated.

In June, Iran expressed its opposition to the “unilateral” scheme for independence of the Iraqi Kurdistan, underlining the importance of maintaining the integrity and stability of Iraq and insisting that the Kurdistan region was part of the majority Arab country.

US opposition to the referendum

The US has already expressed its opposition to the referendum, arguing that it would weaken the Arab-Kurdish joint military operations which have managed to send the Takfiri Daesh terrorist group into retreat in both Iraq and war-torn Syria.

“The United States has repeatedly emphasized to the leaders of the Kurdistan Regional Government that the referendum is distracting from efforts to defeat” Daesh and “stabilize the liberated areas,” the White House said in a statement on Friday.

Washington also warned that holding the vote in “disputed areas” would be “provocative and destabilizing.” It also urged leaders of the Kurdistan region to call off the referendum and commence serious and sustained negotiations with Baghdad.

However, on Thursday, Barzani said that if the US had a stronger alternative to the plebiscite, the Kurdish leadership would look at it.

"But if they want us to postpone the vote with no alternatives, we won't,” he added.

Several other countries have also expressed concerns that such a referendum could ignite a fresh conflict with Baghdad and possibly its neighboring countries, diverting attention from the ongoing war against Daesh Takfiri terrorists in Iraq and Syria.