TEHRAN, September 18 - Bahrain’s king Hamad bin Isa Al Khalifah has called for an end to the Arab boycott of Israel, days after the Israeli premier said relations with the Arab world were better than any other time. 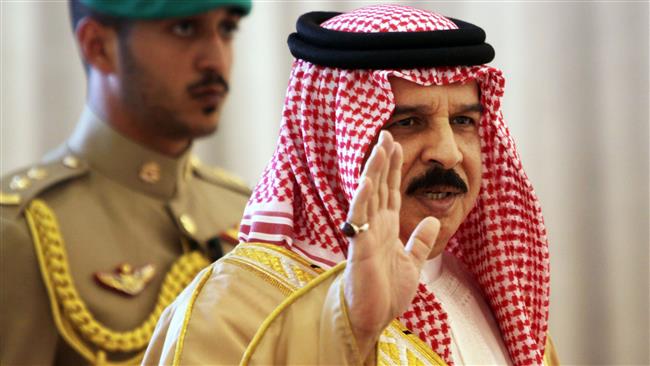 TEHRAN, Young Journalists Club (YJC) - According to Israeli media, King Hamad’s made the remarks at an event hosted by pro-Israeli group Simon Wiesenthal Center in Los Angeles, calling for diplomatic ties to be established with the Israeli regime.

King Hamad also told Simon Wiesenthal Center director Rabbi Abraham Cooper that Bahraini citizens are free to visit Israel as they please. His stance on Israel was welcomed by the Israeli center's director who hailed the monarch as "ahead of the pack and smart."

"If I had to predict, I would tell you that the Arab world’s relationship with the state of Israel is going to dramatically change... This is a dinner tonight that’s hosted by a Jewish organization that no one will say is not so pro-Israel," Cooper added.

Cooper and his partner Marvin Hier met with King Hamed at the center and discussed the opening of a museum for religious tolerance in Bahrain's capital Manama towards the end of the year.

The change of stance comes weeks after Israeli Prime Minister Benjamin Netanyahu described relations with the Arab world better than any other time.

“What’s happening now with the Arab bloc states has never before happened in our history – even when we signed agreements,” said Netanyahu. “What we have now is greater than anything else during any other period in Israel’s history."

Last week, reports emerged that a secret meeting was held between a leading Saudi royal and senior Israeli officials in Tel Aviv, and in June, leaked emails of the UAE's ambassador to the US Yousef al-Otaiba's suggested that Abu Dhabi had established secret links with pro-Israel think-tank Foundation for Defense of Democracies (FDD).

Last year, a video of a ceremony to mark the Jewish Hanukkah holiday hosted by Bahrain circulated on social media, showing Bahraini men in local kaffiyeh attire attending the party and dancing with Orthodox Jews. The video prompted condemnation from the Palestinian movement Hamas that urged Bahrain to end the move towards
normalizing ties with Israel.

The regime has accused rights groups of contributing to the worldwide anti-Israeli Boycott, Divestment, and Sanctions (BDS) movement. The BDS was initiated in 2005 by over 170 Palestinian organizations that were pushing for “various forms of boycott against Israel until it meets its obligations under international law.”

The boycott of Israel was adopted by the Arab League and its member states and bars all relations between Arab nations and Israel.

Thousands of volunteers worldwide have joined the BDS to help promote the Palestinian cause of ending Israeli occupation and oppression. Those include international trade unions, NGOs, initiatives, academic and business societies, trade unions, and cultural figures.

Last year, the regime allocated $32 million to fighting the high-profile movement. It has also banned anyone found to support the BDS from entering the Israeli-occupied territories.