TEHRAN, September 18 - The UN chief has urged Iraq’s Kurdish leaders to scrap an upcoming secession vote, saying it would undermine the ongoing battle in the Arab country against Daesh terrorists. 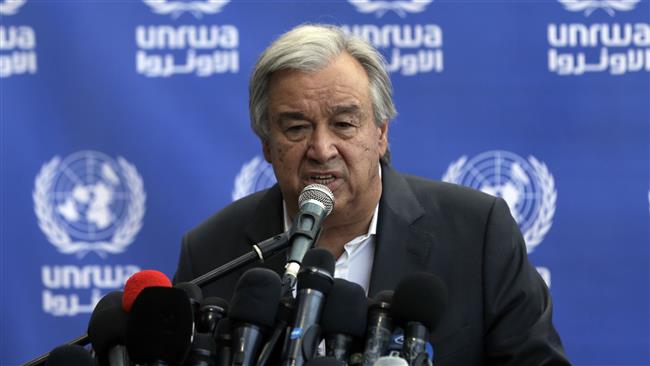 TEHRAN, Young Journalists Club (YJC) - "Any unilateral decision to hold a referendum at this time would detract from the need to defeat ISIL (Daesh)," United Nations Secretary General Antonio Guterres said in a statement on Sunday.

It would also harm reconstruction efforts and the return of refugees after years of war with Takfiri terrorists, he added.

Guterres said any dispute between the Iraqi government and the Kurdistan Regional Government had to be resolved through dialog and "constructive compromise."

UN envoy to Iraq Jan Kubis also told Kurdish leader Massoud Barzani last week that the world body was ready to broker negotiations to address "all the problems and outstanding issues" between the Kurds and Baghdad.

The negotiations would aim to reach a deal within two or three years on the "principles and arrangements" for future relations between Baghdad and the region, the document said.

The region is adamant to hold the referendum on September 25 despite regional and international opposition. Critics say partitioning Iraq could be the last thing the country, scarred by years of violence, needs.

Also on Sunday, Secretary of Iran’s Supreme National Security Council Ali Shamkhani warned that any “illegal” separatist move in Iraq would escalate insecurity in the country and across the region.

Separately, Iran’s Parliament Speaker Ali Larijani highlighted the fact that Iraq’s government, legislature and neighbors are opposed to the vote.

Larijani made the remarks on Sunday in Iran's West Azerbaijan Province which has a sizable Kurdish population. “This issue is going to lead to crisis,” he said.

Since Iraq’s liberation from former dictator Saddam Hussein’s despotism, the country’s enemies have been causing all sorts of problems by dispatching terrorists and supporting them and are now trying to break it apart, Larijani noted.

The speaker said certain sides were unhappy to see the Iraqi people enjoy a democratic existence.

“This is because Iraq has a considerable population, with its energy resources being put into good use. Other countries feel like they have fallen behind … so they want to make Iraq face another adventure but they will not succeed,” Larijani said.